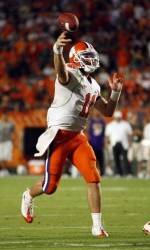 Spiller and Parker Honored With National Awards by Rivals.com

Spiller had a Clemson record 310 all-purpose yards, as he had 125 on three kickoff returns, 104 yards on six receptions and 81 yards on 14 rushing attempts. He scored on a 90-yard kickoff return and a 56-yard pass from Parker.

Parker completed 25-37 passes for 326 yards and three touchdowns. It was the second best yardage and completion total in Clemson history for a freshman. Parker became just the third freshman quarterback to lead Clemson to a win over a top 25 team, just the second to do it on the road and the first to do it against a top 10 team.