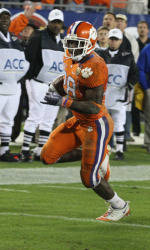 Additionally, Spiller averages 193 all-purpose yards per game, fourth best in the nation. He has 7416 all-purpose yards for his career, third best in NCAA history, and his 2508 yards this year are an ACC record. He has 1145 yards rushing after recording 233 yards in the ACC Championship game against Georgia Tech. He is the only player in the nation to score a touchdown in every game this year.

McDaniel has eight interceptions this year to lead the ACC and rank in a tie for second best in the nation. His eight interceptions also tied a Clemson single season record. The junior from Tallahassee, FL has 87 tackles to rank fourth on the team, including a pair of quarterback sacks.

Both Spiller and McDaniel made firs-team All-ACC earlier this month.