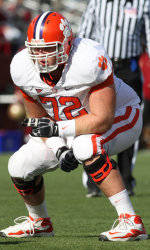 CLEMSON, SC – Six members of Clemson’s 2011 ACC Championship team had signed free agent contracts with NFL teams as of Monday afternoon. The following list is in addition to the four former Tigers who were drafted Friday and Saturday.

The list of signees includes linemen Landon Walker with the Cincinnati Bengals, Antoine McClain with the Baltimore Ravens, Rennie Moore with the Houston Texans and Kourtnei Brown with the San Francisco 49ers. Walker played more snaps than any other Clemson player in history with over 3100 plays, while McClain was a three-year starter in the offensive line. Moore did not start until this season, but had 10 tackles for loss, second on the team. Brown scored two touchdowns on returns in the win over North Carolina, a first for a Clemson lineman since the 1950s.

Punter Dawson Zimmerman has signed with the Atlanta Falcons and fullback Chad Diehl has signed with the Baltimore Ravens. Zimmerman finished his career sixth in school history in punting average, while Diehl played in 57 games, a school record. Starting offensive tackle Phillip Price also could sign with a team this week as well.

Last Friday, Andre Branch was taken in the second round of the NFL draft by the Jacksonville Jaguars, the 38th selection of the draft. Dwayne Allen, the winner of the John Mackey Award this past season, was the first pick of the third round by the Indianapolis Colts. Second-team All-ACC defensive tackle Brandon Thompson went in the third round to the Cincinnati Bengals, the 93rd overall selection, and Coty Sensabaugh was the 115th selection of the draft, a fourth round selection.