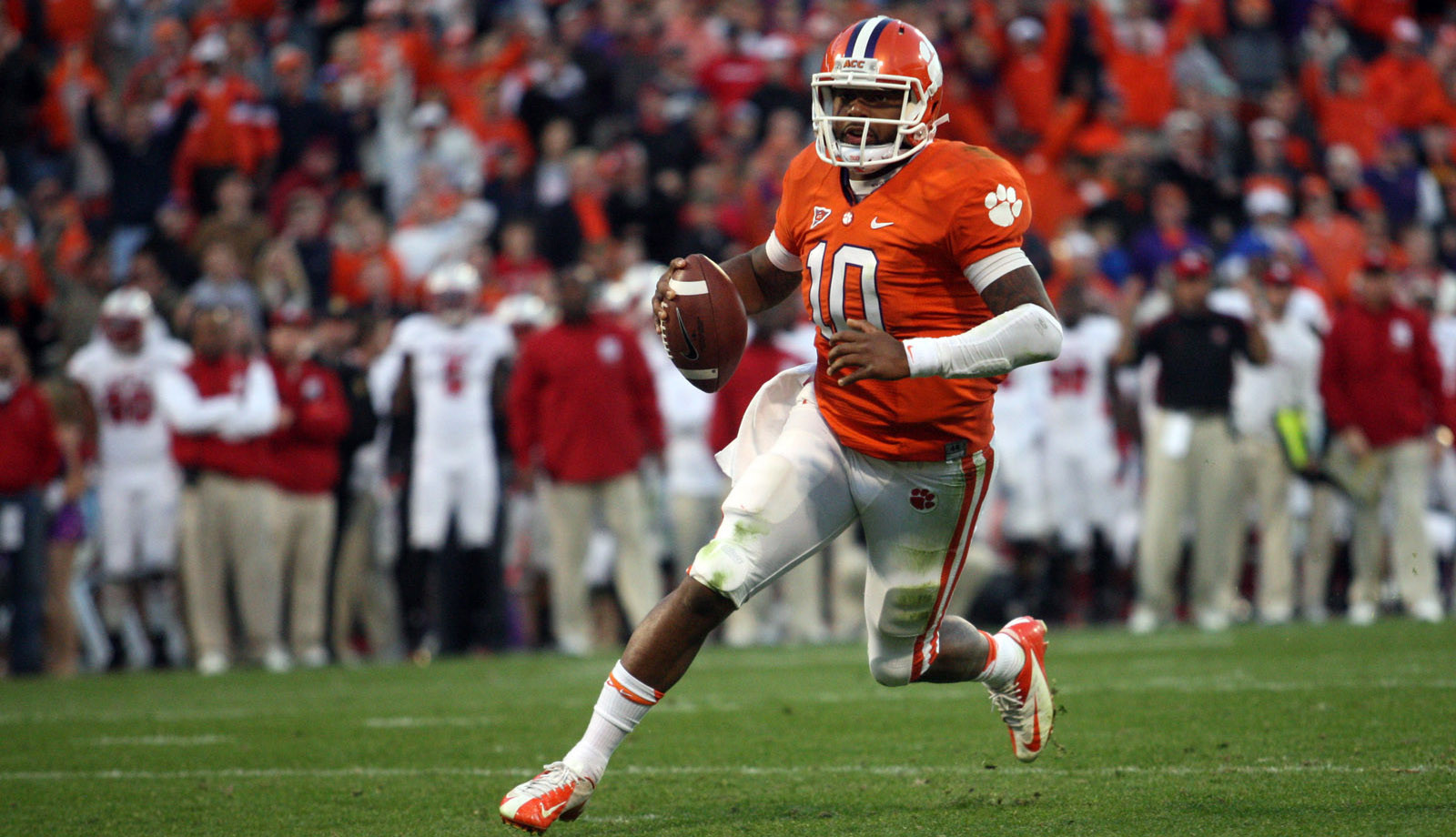 CLEMSON, SC – Clemson had six of the 11 All-ACC players on offense according to the All-ACC team released by the Atlantic Coast Sports Media Association on Monday.  It is the first of two All-ACC teams released, as the league coaches will announce an all-conference team next week.

This is the first time in history Clemson has had six all-conference players on the first-team offense, and the first time any team has done it since Florida State accomplished the feat in 1995.

Kicker Chandler Catanzaro and safety Rashard Hall were named to the second team, while Malliciah Goodman and Sammy Watkins were named honorable mention.

With Freeman’s selection, he became the first Clemson center in history to be named first-team All-ACC in consecutive years.  Boyd is the first two-time first-team selection at quarterback from Clemson since Steve Fuller in 1977-78.

Boyd leads the ACC and ranks fourth in the nation in passing efficiency with a 168.5 figure, on pace for a Clemson record.  The junior has completed 251 passes in 377 attempts for 3550 yards and 34 touchdowns.  He has also run for nine touchdowns.  His 43 touchdowns in terms of touchdown responsibility are tied for first in the nation.

Boyd also leads the ACC and ranks eighth in the nation in total offense per game with 336.8 yards per contest.  The native of Virginia has quarterbacked Clemson to 20 wins in the last two years and is the first Tiger starting quarterback to lead the Tigers to consecutive 10-win seasons since Rodney Williams in 1987-88.

Freeman has established a Clemson record for career plays with 3267.  He has started each of the last 48 Clemson games and has played in 52 games played in his career.  The first four-year starter at center for the Clemson program since the 1940s, Freeman is the only senior starter on Clemson’s offensive line.  This is the first time Clemson has won at least 10 games with just one senior starting on the offensive line since 1989.

Hopkins and Ellington have both gone over the 1000-yard mark in their respective categories this year. Hopkins has 1214 receiving yards this year, first in the ACC and just five short of Sammy Watkins single season mark of 1219 set last year.  Hopkins has 16 touchdown receptions to rank second in the nation.  It is also a Clemson single season mark.

The native of Central, SC has set an ACC record this year for different games catching a touchdown pass with 11.  He has also tied the league mark for consecutive games catching a scoring pass with nine in a row, a record he could break in Clemson’s bowl game.

Ellington has 1031 rushing yards this season, second best in the ACC.  It is his second career 1000-yard season as he had 1,178 last year.  He is just the fourth player in Clemson history with two 1000-yard rushing seasons.  He also has scored eight rushing touchdowns and has a 5.1 average per carry.

Ford ranks second in the nation in touchdown receptions by a tight end with eight.  He has 31 receptions for 411 yards for the year.  His eight touchdown receptions have tied Dwayne Allen‘s record for a season, a mark set last year.   Ford’s listing on the team gives Clemson the first-team All-ACC tight end three of the last four years by three different players.  Michael Palmer was the first-team in 2009 and Allen was named in 2011 when he also won the John Mackey Award.

Brandon Thomas was the sixth Clemson player named first-team All-ACC.  Clemson’s starting left tackle in every game, he was a big reason the Tigers rank in the top 15 in the nation in total offense, points scored and passing yards.  He was named ACC player of the week for his performance against Duke.

Catanzaro made 16-17 field goals this year and has scored 99 points, most on Clemson’s highest scoring team in history.  He is also 54-55 on extra points, so the junior from Greenville, SC has missed just two attempts all season.  He had four field goals in the season opening win over Auburn.

Rashard Hall had four interceptions this year to lead the Clemson team and he ranks third in the ACC in that category.  He has 17 career takeaways, third in Clemson history.  He has started 39 games in his Clemson career in the secondary.

Watkins missed three games this year, but still has 57 receptions for 708 yards and three scores.  He ranks third in the ACC in receptions per game, fifth in yardage.  Goodman leads the ACC in fumbles caused with four and has four sacks to rank second on the team.