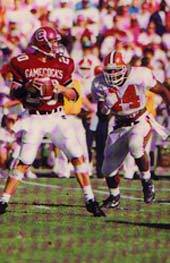 The sideline commentators on the Clemson radio network have been announced for Clemson’s next three football games. Joe Bostic will handle duties Thursday night in Raleigh for the NC State game. Perry Tuttle will be on the sidelines for the Clemson-North Carolina game in Memorial Stadium on October 25. Levon Kirkland will handle duties for the November 1 game at Wake Forest.

Bostic was a first team All-American for two years and started on the offensive line for Clemson from 1975-78. He was named the ACC’s top blocker in 1977 and was ranked as Clemson’s #11 football player of all-time by a panel of Clemson historians in 1996. Bostic went on to a 10-year career in the NFL with the St. Louis Cardinals and was a member of the 1979 All-Rookie Team.

Tuttle was a first-team all-American receiver at Clemson who set school marks for career receptions, reception yards and single-season yardage. He had five receptions for 56 yards, including a 13-yard touchdown pass, in Clemson’s Orange Bowl victory over Nebraska that won the school’s only national championship in football. He made the cover of Sports Illustrated the next week and is still the only Clemson athlete to make the cover while still at the school.

Kirkland was an All-American in 1990 and 1991 as a linebacker. He was the only underclassman to be a finalist for the 1990 Butkus Award and was a semifinalist for the Lombardi Award in 1991. He earned MVP honors in the 1989 Mazda Gator Bowl and was a second-round draft pick by the Pittsburgh Steelers. He was named All-Pro in 1996 and 1997.