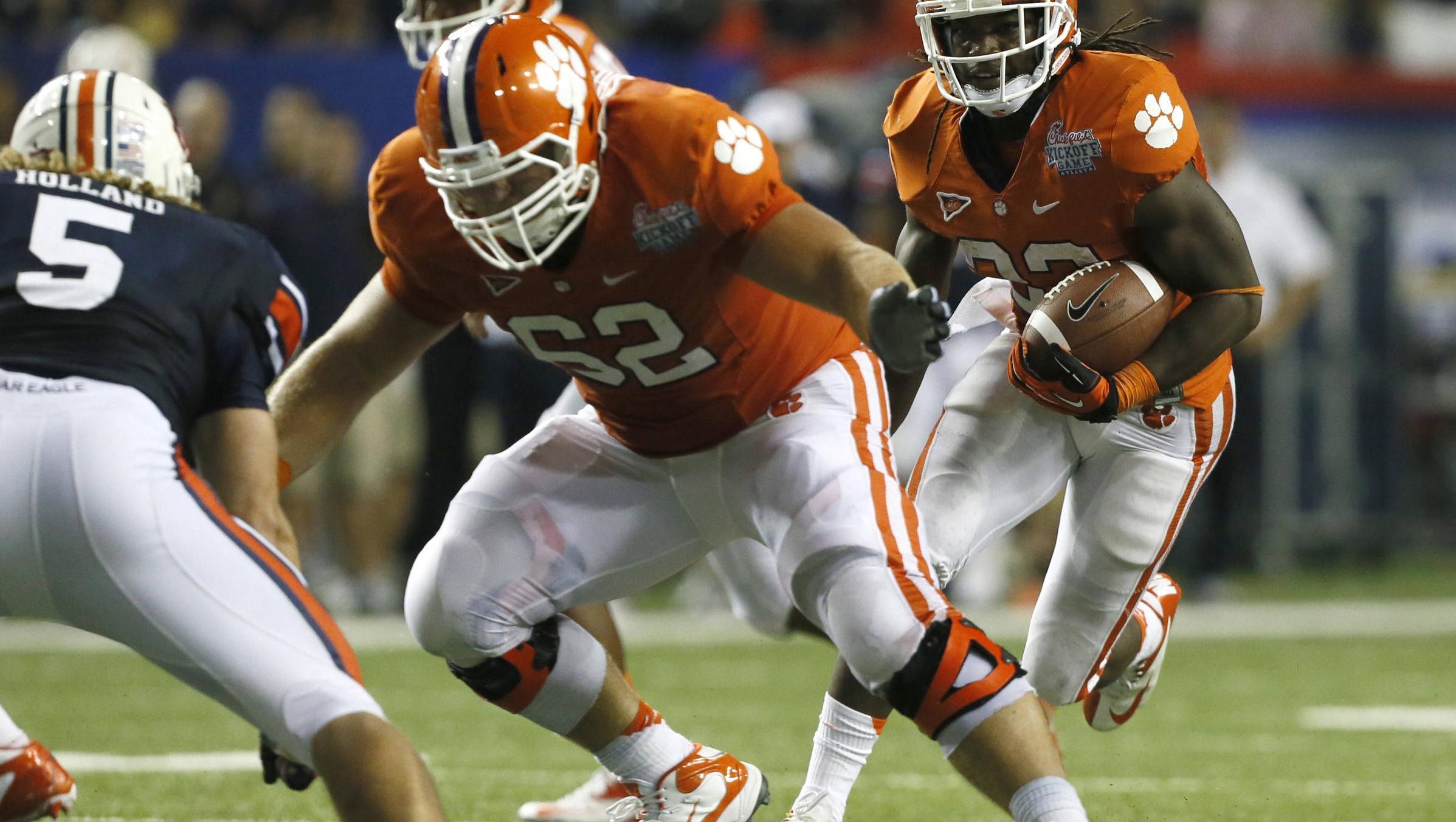 Shatley and Hopkins Named ACC Players of the Week

GREENSBORO, NC – NC State sophomore defensive tackle Thomas Teal headlines a list of eight players named as the Atlantic Coast Conference Football Players of the Week, announced by the conference on Monday. Teal tallied six tackles, including two loss, as the Wolfpack upset No. 3 Florida State, 17-16. Walt Canty, a senior safety for Duke, posted a game-high 14 tackles in the 42-17 win over Virginia as the Blue Devils improved on their best start since 1994. Clemson’s DeAndre Hopkins, the Receiver of the Week, caught seven passes for 173 yards in the 47-31 win over Georgia Tech. Teammate Tyler Shatley was named the Offensive Lineman of the Week after helping the offense accumulate 601 yards of total offense. The Offensive Back of the Week, North Carolina’s Giovani Bernard, set a career high with 262 yards rushing in the 48-34 win over Virginia Tech. Sean Tapley, the Specialist of the Week, became the first player to return a kickoff for a touchdown against the Hokies since 1993 as he scored on a 94-yard return. Maryland’s Demetrius Hartsfield, the Linebacker of the Week, finished with 10 tackles as the Terrapins won their ACC opener, 19-14, over Wake Forest. Teammate Stefon Diggs was named the Rookie of the Week for the second time this year after catching five passes for 105 yards. OFFENSIVE LINEMAN – Tyler Shatley, Clemson, RS Junior, OG, 6-3, 295, Icard, N.C.Shatley played 91 of 93 snaps and helped Clemson to 601 yards of total offense in the 47-31 victory over Georgia Tech. Shatley had five knockdown blocks and graded a career-high 91 percent. He did not allow a sack and provided many key blocks in the fourth period when Clemson ran for 114 yards to put the game away.

RECEIVER – DeAndre Hopkins, Clemson, Junior, WR, 6-1, 205, Central, S.C.Hopkins had seven receptions for 173 yards and two touchdowns in Clemson’s 47-31 win over Georgia Tech. The 173 receiving yards rank as the fourth most in a game in Clemson history. He set the school record with 197 yards at Boston College last week. Hopkins had touchdown catches of 58 and 35 yards, the second of which put the Tigers up 36-31. He then threw a two-point conversion pass to quarterback Tajh Boyd to put the Tigers up 38-31.

OFFENSIVE BACK – Giovani Bernard, North Carolina, Sophomore, TB, 5-10, 205, Davie, Fla. Bernard rushed for a career-high 262 yards on 23 carries and scored a touchdown in North Carolina’s 48-34 victory over Virginia Tech. The 262-yard performance is the fifth-highest single-game rushing total in North Carolina history and the most ever gained against Virginia Tech in any game. Bernard became the first Tar Heel to rush for 200 yards in a game since Ronnie McGill totaled 244 against Wake Forest in 2003. In one stretch from the second to third quarter, Bernard had eight carries for 186 yards, an average of 23.3 yards per rush. Bernard scored on a 62-yard run on 4th-and-inches on the first play of the second quarter and later added a 51-yard run. His 11.4 yards per carry is a single-game school record.DEFENSIVE LINEMAN – Thomas Teal, NC State, RS Sophomore, DT, 6-2, 315, Bennettsville, S.C.Teal notched six tackles in the Wolfpack’s 17-16 win over No. 3 Florida State. The redshirt sophomore tackle had two tackles for loss as the Wolfpack held the Seminoles scoreless in the second half. Teal helped the defense hold Florida State to 3-for-15 on third down conversions. NC State also recorded four sacks against the Seminoles, a team that had yielded only six sacks in its previous five games.LINEBACKER – Demetrius Hartsfield, Maryland, Senior, LB, 6-2, 240, Raleigh, N.C.Hartsfield led a strong defensive effort as Maryland beat Wake Forest 19-14 in its ACC opener. The Terrapins held the Demon Deacons to 241 yards of total offense, including just 45 in the second half and four in the fourth quarter. Hartsfield finished with 10 tackles, seven of them solo, one pass breakup and a sack. His sack of Wake quarterback Tanner Price on fourth-and-15 with under a minute to play essentially sealed the victory for Maryland.DEFENSIVE BACK – Walt Canty, Duke, Senior, S, 6-1, 220, Roebuck, S.C.Canty spearheaded Duke’s defensive effort in the 42-17 win over Virginia with a game-high 14 tackles, 3.0 tackles for loss, and one quarterback pressure. With Duke nursing a 21-17 advantage early in the third period, Canty made three tackles in a four-play span that helped turn the momentum of the game. Canty helped Duke limit the Cavaliers to a combined 4-for-19 (.211) on 3rd- and 4th-downs after the Cavaliers entered the week at 46.0 percent (40-of-87) as Duke become the first team in 2012 to hold Virginia scoreless in the second half.

SPECIALIST – Sean Tapley, North Carolina, Sophomore, WR, 6-1, 185, Jacksonville, Fla.Tapley returned a kickoff 94 yards for a touchdown in the first quarter in North Carolina’s 48-34 win over Virginia Tech. He finished with four kickoff returns for 152 yards. The touchdown was the first allowed by Virginia Tech on a kickoff since 1993, spanning an FBS-record 237 consecutive games. It was the first of Tapley’s career and the first for North Carolina since T.J. Thorpe had a 100-yard return last year at Clemson. Tapley also caught two passes for 43 yards and a touchdown in the win.ROOKIE – Stefon Diggs, Maryland, Freshman, WR, 6-1, 185, Gaithersburg, Md.Diggs turned in his second straight 100-yard receiving game by hauling in five passes for 105 yards in Maryland’s 19-14 win over Wake Forest. His 63-yard reception in the fourth quarter, the longest by a Terrapin this year, set up the game-winning one-yard touchdown run by Justus Pickett. On that play, Diggs caught a pass over the middle six yards beyond the line of scrimmage, and then took it 57 yards after the catch. The freshman also had 20 punt return yards and seven rushing yards, and ranks second in the ACC with 154.8 all-purpose yards per game.