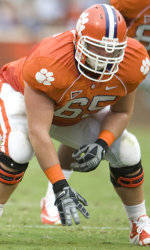 CLEMSON, SC – Seven members of the Clemson football team were named to the ACC All-Academic team on Wednesday. The Tigers had the second-most selections to the team, trailing only Duke, who had 12.

Thomas Austin, who has graduated from Clemson and will be pursuing an NFL career next year, was named to the Academic All-ACC team for a record tying third time. Austin was a starter in every game this past season and served as one of the team co-captains. He was a third-team All-American according to the Sporting News on the field and was also second-team All-ACC.

Michael Palmer was named to the team for the second time in his career, as he was also named two seasons ago. Palmer was a first-team All-ACC tight end on the field as well, as he had 43 catches in 2009 to set a Clemson record for a tight end.

Sophomore linebacker Brandon Maye made the team for the second consecutive year. Maye was also a CoSIDA Academic All-District III selection this year. He ranked third on the Clemson team in tackles with 103 and set a Clemson record for caused fumbles with five.

Mason Cloy and Dawson Zimmerman were a pair of sophomores named to the ACC Academic team. Cloy started five games and played in 13 of the 14. He had 52 knockdown blocks, third best on the team. He suffered a broken leg in the ACC Championship game against Georgia Tech, but will return for the 2010 season. Zimmerman was Clemson’s starting punter in 2009 with a 39.1 average.

Two Clemson freshmen were named to the team and both were also named Freshmen All-Americans by various services for their work on the field. Safety Rashard Hall had six interceptions to rank 19th in the nation in that category. He also had 63 tackles to rank sixth on the team. Starting center Dalton Freeman also made the team. On the field he had nine starts in his 13 games. Clemson scored at least 34 points in six of the nine games he started in 2009.