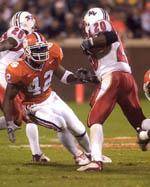 Seven former Clemson football players, including six off the 2002 team, have signed free agent contracts with National Football League teams. The total does not include Nick Eason and Bryant McNeal, who both were drafted in he fourth round of the NFL draft on Sunday.

In addition to the seven members of the 2002 Clemson team who will get tryouts with the NFL, 2001 team members T.J. Watkins signed a free agent contract over the weekend with the Buffalo Bills. Watkins was a starter at offensive tackle from 1999-01. He was one of the last players cut by the Seattle Seahawks last season.

Bodrick started all 13 games for the Tigers in 2002 and had 65 tackles, sixth best figure on the Clemson team. He also had seven tackles for loss. Thomas finished the year with 167 tackles and ranked sixth in the nation on a per game basis. He tied for second on the team in tackles for loss with nine. The senior from Georgia was an Academic All-ACC performer this past season.

Byrd was a three-year starter and performed on four bowl teams during his career. He played nearly 900 snaps in 2002, more than any other Clemson offensive player. He started all 13 games last year and 27 of 47 career games with the Tigers.

McKelvey, who will join Bodrick in Tampa Bay, led Clemson in reception yards this past season with 785. He had a career high 52 catches as a senior and had a team best four reception touchdowns.

Mance finished second in the ACC in interceptions to freshman teammate Justin Miller. He had six interceptions for the year and 12 for his career. He concluded the year with 62 tackles and a team best 17 passes broken up. Mance was a fourth-team All-American in 2002.

In addition to the players listed above, Derrick Brantley signed a contract with the Houston Texans on Tuesday.

Historically, Clemson players have had success in the NFL as free agents. Over the years 27 former Clemson players who have signed free agent contracts have played in the NFL. The list is led by Jeff Bostic, who played 14 years in the NFL, more than any other former Tiger in history. He won three Super Bowl Championship rings, also a record for a former Tiger. In 2002, Woodrow Dantzler made the Dallas Cowboys as a free agent. Current NFL tight end Lamont Hall has played each of the last four seasons after signing as a free agent.