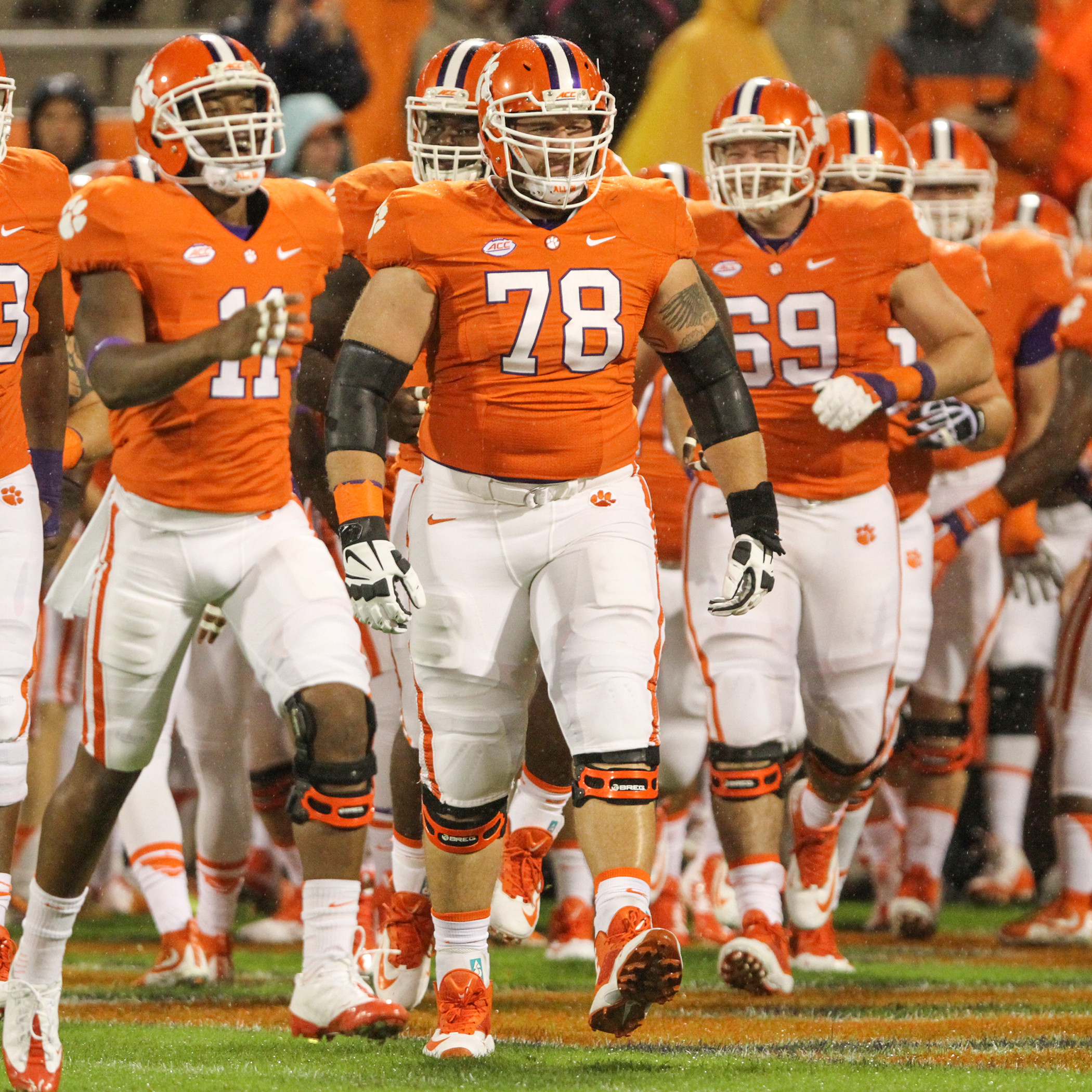 On social media and around campus, Eric Mac Lain in known as “Mr. Clemson.” The graduate offensive guard may not score touchdowns, catch passes or kick game-winning field goals, but there is no doubt he deserves the title of “Mr. Clemson.”

Clemson possesses a rich military and agricultural tradition. Both are fields that require, first and foremost, an unparalleled work ethic. Clemson exists because of the hard work and sacrifice of many people, and as Clemson graduates, fans and supporters, we understand and embrace that. Hard work and service define us.

Mac Lain is known for his work ethic, has sacrificed immensely for his team and cares deeply about Clemson and the surrounding community.

He is known as “Mr. Clemson,” and for reasons that are far bigger than football.

Mac Lain stepped on campus in the summer of 2011 as one of the nation’s most heavily recruited tight ends. However, he did not play right away as some had expected. After redshirting as a freshman, Mac Lain saw a need for more bodies on the offensive line and asked head coach Dabo Swinney if he could transition to the offensive line. The transition was anything but easy.

“Making that transition was extremely difficult,” admitted Mac Lain. “It was a two or three-year process, and now I’m finally seeing the fruits of my labor.”

Mac Lain said the position change caused him to do some soul searching. He had played tight end his entire football career and was not sure if he was willing to give it up. He credits his teammates and fellow fifth-year seniors, Ryan Norton and Joe Gore, for helping him through the transition.

“They helped me stay with the process by encouraging me to watch film and put in the extra work, and it’s finally paying off.”

His transition to the offensive line has been defined by hard work and sacrifice. It has also earned him the respect and admiration of his teammates, allowing him to become a senior leader for the Tigers in his fifth and final season.

As for his leadership style, he simply attempts to lead his younger teammates in the same manner that former Tigers led him when he was a freshman.

“I really just try to mentor the younger guys,” said Mac Lain. “We have 40 freshmen on this team and it reminds me of 2011, when I was a freshman and we had 42 freshmen.”

Mac Lain has had a strong career so far and has been a reason Clemson entered the season on a streak of three straight double-digit win seasons and three top-15 final rankings. This year, he was a preseason All-ACC selection in addition to being a watch list candidate for the Outland Trophy.

Leadership is a daily thing for Mac Lain, who said he tries to lead by example.

“I always remind the guys we’re good, but we’re not that good. I try to avoid complacency, keep my head down and keep grinding every day.”

Mac Lain also had the luxury of playing with and learning from two of the most well-respected leaders in school history, Tajh Boyd and Dwayne Allen.

Boyd, the ACC’s all-time leader in passing scores, taught Mac Lain a lot about leadership, whether Boyd realized it or not. When Boyd decided to return to Clemson for his senior year, Mac Lain witnessed the quarterback’s selflessness, humility and devotion to his team.

“I learned from Tajh in the way he handled the media attention and the glory and how he stayed humble. He was projected to be a top pick in the NFL, but he wanted to come back because he had goals that he hadn’t reached yet.”

However, the biggest influence in Mac Lain’s growth and development as a leader was Allen. Mac Lain only played one season with Allen, but the two forged a bond that continues to this day.

“Dwayne and I are from the same area, so there was a natural tendency to watch him and learn from him. He provided leadership throughout my career, and I try to emulate him.”

Allen not only influenced Mac Lain in terms of leadership on the field and in the locker room, but Allen also encouraged Mac Lain to get involved in the Clemson community.

“Dwayne was a huge advocate for community service, something I really enjoy doing,” said #78. “He instilled in me early that I needed to get out there and involve myself in the community.”

Allen has continued that in the NFL in Indianapolis.

Mac Lain has made community service a priority during his career at Clemson. He has spoken at numerous local schools, participated in Habitat for Humanity, visited children in hospitals, volunteered with local Boy Scouts and participated in South Carolina’s “Welcome Home Troops” program. He compiled more community service hours than any other Clemson football player during the 2014-15 academic year.

He earned a Top Six Award from the ACC for community service as well as a Jerry Richardson Community MVP Award. Mac Lain’s efforts in the community have also been recognized nationally, as he was nominated to the AFCA All-Good Works Team in the preseason.

Along with Allen, Mac Lain’s parents and family also encouraged him from a young age to give back to his community.

“Giving back is something that’s been instilled in me by my parents since I was young. They always reminded me to try to leave a place better than I found it. Otherwise, I didn’t do my job.”

As a player whose career has been defined by service, sacrifice and hard work, Mac Lain hopes to give back to a university and football program that has given him so much.

“I want to be remembered as a passionate guy who loves Clemson with all his heart. This school has given me so many opportunities and so much joy and happiness, and I hope when people see me play, I show that.”

Mac Lain also is a man of deep faith and knows that his purpose in life is much greater than winning football games on Saturdays.

“Ultimately, I want people to see the Lord’s light shining through me. Scripture tells us to be a beacon of light in such a dark place, and hopefully when people see me play, they can see that light shining.”