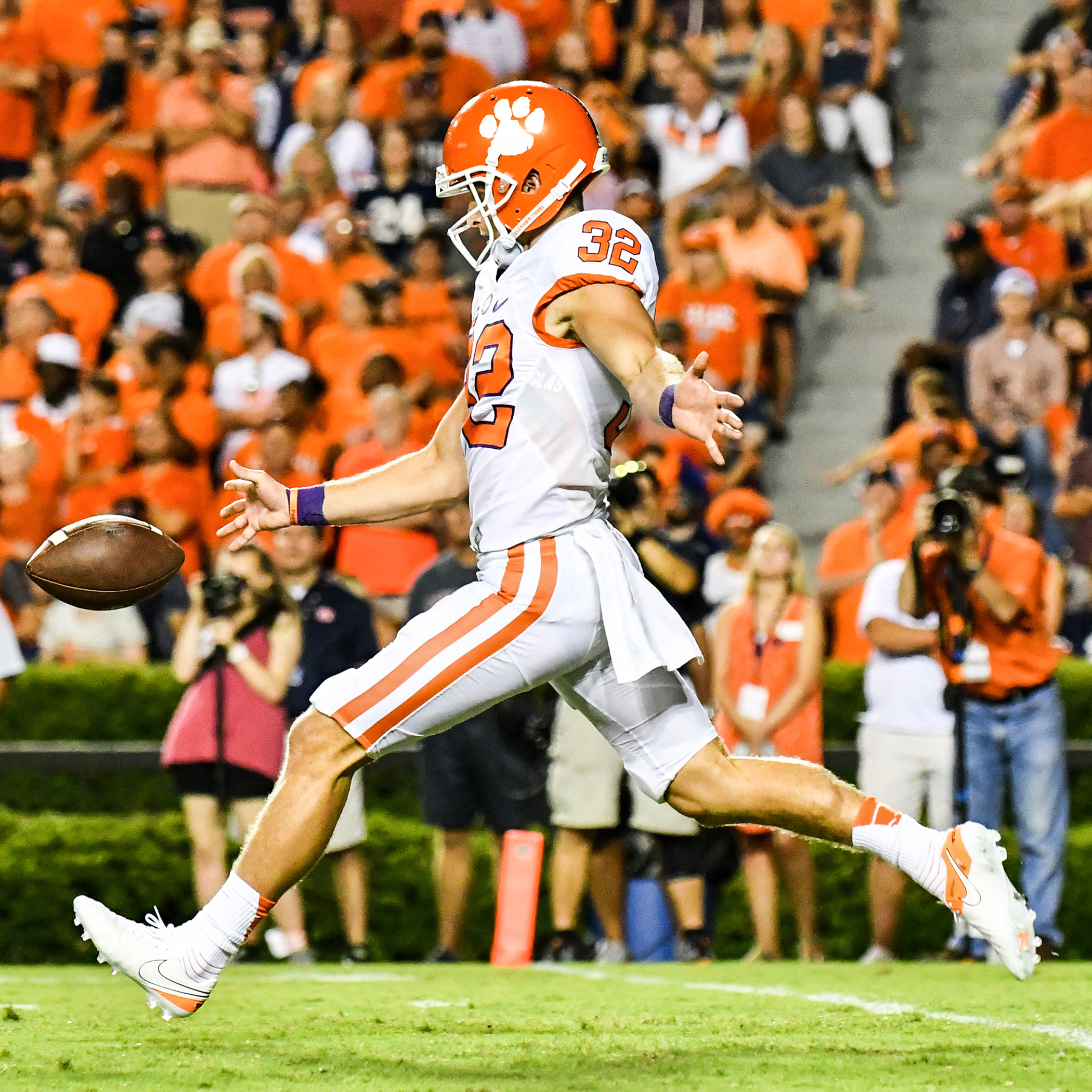 When he first set foot on Clemson University’s campus, Andy Teasdall knew he wanted to be involved in athletics.

“A goal of mine growing up was to play college sports. I always liked sports and being a part of a team.”

However, Teasdall’s sport of choice was not football…it was lacrosse. He had taken up lacrosse because his brothers played and his father excelled in the sport.

“My dad won two national titles with Johns Hopkins’ lacrosse team,” said #32. “I originally started playing because he put a stick in my hands.

“He would coach me growing up. I was always better at lacrosse than football and I would still say that is true.”

During his last few years in high school, Teasdall was trying to decide what he was looking for in a college and whether or not lacrosse played a part in this decision.

“I always wanted to go to a big-time school where you could watch your team on ESPN and follow the sports after you graduate. But the schools recruiting me for lacrosse were not that type of school.

“Once I realized that lacrosse wasn’t going to work out, I chose Clemson, because that is where I wanted to go whether I played a sport or not.”

Still, Teasdall wanted to remain active and fulfill his childhood ambition of playing at the college level, so he attended walk-on tryouts for the football team during his freshman year.

“I tried out in August for kicker/punter and wide receiver,” said the Winston-Salem, N.C., native. “They liked what they saw in my kicking ability, but there weren’t any spots on the team.”

The coaches told Teasdall to be patient and they would see if they could find a place for him on the squad.

“Somehow, I got pulled on the team the following spring with an extended tryout and did enough to prove I could stick with it.”

Once he made the team, Teasdall was behind Bradley Pinion and Chandler Catanzaro, both of whom are now in the NFL.

“I didn’t really think I would get a chance to play…I was just happy to be on the team and play at this level. I was always trying to be the backup, but wasn’t really good enough behind them, so I was the backup’s backup.”

But after Catanzaro graduated, it was only Pinion and Teasdall, and Pinion had made the decision to leave early for the NFL draft, so head coach Dabo Swinney took Teasdall aside.

“He pulled me in his office and said something along the lines of, ‘This spring will be a big spring for you. Continue to work hard and earn your spot.’”

Teasdall found motivation in his only performance at the college level, the 2014 Russell Athletic Bowl.

“At the Russell Athletic Bowl, I actually got in twice and did well (43.5-yard average on two punts), and so I used that to push myself and had a really good spring and summer.

“One day, it clicked and I realized I could play at this level.”

One afternoon during summer camp, the coaches decided to surprise Teasdall and fellow walk-on Hunter Renfrow. They were told they were going on scholarship.

“I was surprised at the timing of my scholarship. I was so happy that I got to share that moment with Hunter. To be able to share that bond with him is pretty cool. It was great that they documented that moment for us.”

Not only did Teasdall and Renfrow share new scholarships, they also share a friendship that is special to Teasdall.

“As great a football player as Hunter is, he is even better off the field. He makes a lot of people around him better. I have really enjoyed getting to know him.”

Another Tiger teammate who Teasdall shares a bond with is defensive tackle Christian Wilkins. In 2015, Teasdall infamously faked a punt on fourth down in the ACC Championship Game against North Carolina, and the play failed miserably. Teasdall had not received instructions from Swinney to run the ball, and the head coach let him know it on the sideline.

But in the 2015 Orange Bowl against Oklahoma, he did call Teasdall’s number, this time with a pass on a fake punt. He completed a perfect pass to Wilkins for 31 yards. It set up a touchdown, and the momentum of the game changed dramatically. The Tigers went on to a 37-17 victory.

“Looking back, the situation and how it worked out is funny. In life and in sports especially, you have to take the good with the good and the bad with the bad. You can’t get too low.

“The fact that coach Swinney called it surprises me still. He is a great visionary, man and role model. To share that moment with Christian is special as well.”

As much as Swinney’s faith in him shaped his on-field performance, someone else had a big part in his game-time philosophy.

“My freshman year of high school, we had a good family friend who was on the football team, #57 Matt Gfeller. He had a very promising future, but had gotten a concussion and passed away.

“That was a really tough time and I try and think about him when I don’t want to do something. His death puts things in perspective, like how important family and friends are.”

Gfeller’s passing pushes Teasdall to be a greater role model for his teammates.

“For the younger guys on the team, I want to be someone who works hard and does the right things. I want to be a good role model for them and someone they can come talk to any time.”

As his time at Clemson comes to a close, Teasdall, who already has his marketing degree, has a few plans on the horizon.

“This could be the last time I am ever on a sports team, so I am enjoying the moment. Of course, I will try Pro Day, but obviously, that is a tough gig. I am trying to delay the real world as much as possible.

“But whatever happens, I am prepared thanks to Clemson.”