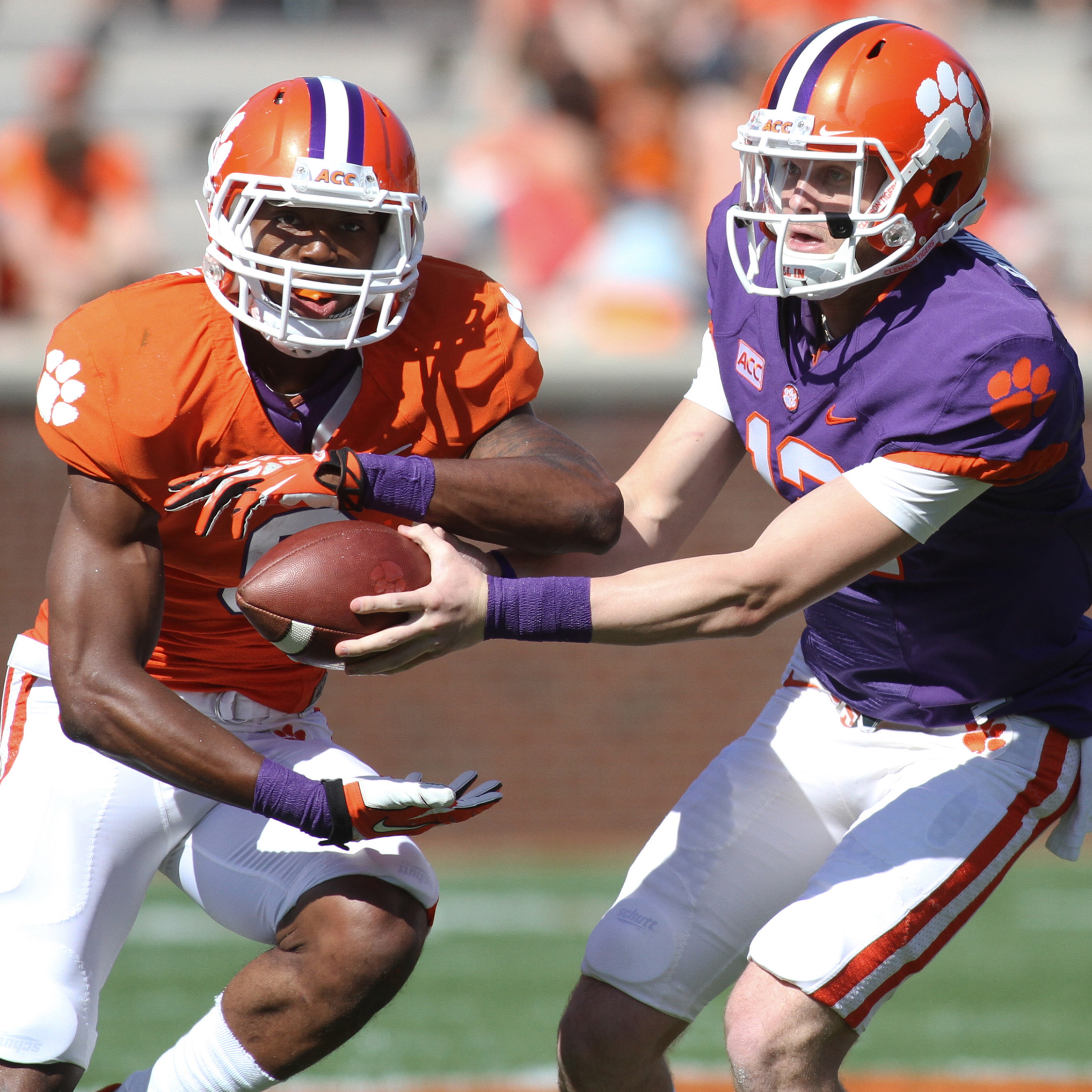 CLEMSON, S.C. – The Tigers held their first stadium scrimmage of the preseason on Saturday morning and Head Coach Dabo Swinney was pleased by what he saw overall.

“It was just the first scrimmage, but I was encouraged,” said Swinney, who is in the process of getting his team ready to face No. 12 Georgia in the season-opener in Athens on August 30. “We have had a tough last four days of practice and the team has worked hard. We have made it hard for them during this period. This is a veteran team who has demonstrated they can meet a challenge.

“I liked the tempo that was set by the offense at the outset. The first-team offense went right down the field (against the first-team defense) and scored a touchdown on the first drive. Then the defense came back strong and at the end of practice won the short-yardage situations we scripted. The defense dominated the goal-line situations. We will have another situational scrimmage Wednesday and we will see how the offense comes back.”

Swinney pointed out some areas that impressed him.

“The tight ends showed up today. Jordan Leggett had a good touchdown reception. The running backs did a good job. Right now it is too tough to say who will get the most carries. We will have a lot of players involved. C.J. Davidson did a good job today, and so did Zac Brooks. D.J. Howard had one of his best practices as well. If we had to play today, we would probably be ‘running back by committee.’

As was the case the previous two practices, starting offensive tackle Isaiah Battle missed the scrimmage with an ankle injury that is not serious. It gave Swinney an opportunity to see his offensive linemen in more than one position.

“The defense dominated the short-yardage situations toward the end of practice,” reiterated Swinney. “That is where our depth shows. I don’t see much difference between our first-team and second-team defense. There is more of a separation on the offensive side of the ball.”

As Swinney stated, the offense got off to a good start, driving 13 plays for 70 yards and a score. The drive ended with a five-yard scoring pass from Stoudt to Leggett. For the day, Stoudt and Watson had two passing touchdowns apiece. The four touchdown receptions were scored by Brooks, Germone Hopper, Leggett and Kyrin Priester.

Wayne Gallman had the only rushing touchdown on a one-yard run. C.J. Davidson was the leading rusher with 25 yards, while Howard added 21 yards. Nine different receivers caught passes, led by three for Hopper and three for tight end Jay Jay McCullough.

“The most impressive stat of the day might have been that we did not have a turnover in the first scrimmage,” said Swinney. “That was good to see from an offensive standpoint.

“The biggest disappointment was that we had too many penalties. Demarre Kitt made perhaps the best play of the day on one catch, but it was wiped out by a penalty.”

Battle, Travis Blanks, Sam Cooper, Tyshon Dye, Kellen Jones, Shaq Lawson and Charone Peake were all held out of the scrimmage due to injury.

The Tigers will take Sunday off and return for two practices Monday.