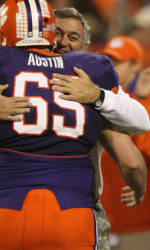 CLEMSON, SC – Brad Scott has been named one of the top 25 recruiters in the nation by Rivals.com. It is the second website to name Scott among its top 25 for the 2011 football recruiting season. The website 247Sports also named him to its top 25 last Friday.

Scott just completed his 12th season with the Clemson program. He has retired from coaching and will work in Clemson’s athletic administration going forward. Scott was one of five ACC coaches named to the top 25 by Rivals. He signed two five-star recruits from Florida, and was involved in the recruitment of five members of Clemson’s 2011 recruiting class overall.