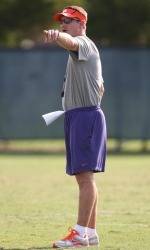 CLEMSON, SC – Clemson recruiting coordinator Jeff Scott has been named a top 25 recruiter by Rivals.com. Scott and offensive coordinator Chad Morris were both named top 50 recruiters by 247Sports.com as well.

Scott was the coordinator of a Clemson class that signed 20 new student-athletes this year, including eight who have already enrolled at Clemson. He just finished his third year as recruiting coordinator and each of the three classes have been ranked in the top 20 in the nation, including top 10 rankings by ESPN.com each of the last two years. It is the first time since the 1980s that Clemson has had consecutive top 10 recruiting classes by a major service.

Morris and his offense certainly had a positive influence on Clemson’s recruiting class this year. The Tigers set records for points scored and total offense in helping the Tigers to their first ACC Championship in 20 years.