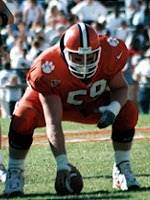 CLEMSON, S.C. – Just one week before Clemson’s season opener against The Citadel, the Tigers shed the pads for a nearly three-hour morning workout Saturday on the practice fields adjacent to the Jervey Athletic Center.

“It was a good practice for us this morning,” said head coach Tommy Bowden. “We were able to put in a lot of quality work on special teams.”

Senior punter Jamie Somaini stood out in practice Saturday. “I have a good feel for what Somaini is doing,” Bowden said. “He had some booming kicks in practice today and it makes you feel a lot better heading into a season when you feel good about your kicking game.”

Following the session with special teams, the team split into offense and defense and later reunited to work on the two-minute drill.

Without pads, junior center Kyle Young, senior wide receiver Justin Watts and senior free safety Robert Carswell returned to practice. Young had missed practice with a foot injury and Watts missed the last couple of days with a knee injury. Carswell underwent surgery on Thursday to repair a tendon in his thumb that was injured in the team’s scrimmage last Tuesday. Bowden said Carswell did as much as one can do after surgery and said that if he was given clearance by the team doctor, he would play on Saturday.

“These guys were in practice today since we took the pads off,” Bowden said. “We’ll see how they respond when we go full pads on Monday.” Bowden said Carswell will not participate in tackling drills for three or four more days.

But Monday will likely be the only day the team participates in “take-to-the-ground” hitting and tackling. The remainder of the week will be light tackling to guard against any serious injuries before the opener Sept. 2 against the Bulldogs.

“We’ve been somewhat fortunate,” Bowden said of his team’s injury situation since the start of practice Aug. 11. “We’ve had some things that were beyond our control, but we haven’t had any of those serious knee injuries.”