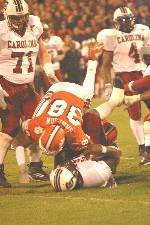 Sampson Dismissed from the Football Team

“Eric Sampson has been dismissed from the Clemson football program for conduct unbecoming of a Clemson student-athlete,” said Bowden. “Academic related issues entered into this decision.”

Sampson started all 12 games for Clemson this year and was fourth on the club in tackles this season with 79. He had a career high 15 tackles in the win at Duke, his only double figure tackle game of the season. He had six tackles in the victory over South Carolina when he played 48 of the 51 defensive snaps.

“We have options as far as a replacement in our defensive lineup,” said Bowden. “We will evaluate those options with our staff in the coming days.”