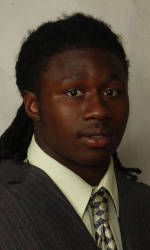 Watkins has 72 receptions for 1073 yards and 10 receiving touchdowns this year and those figures are second in the ACC in all three areas. He leads all freshmen receivers nationally in receptions, yards and touchdowns and his figures are also all-time ACC records for freshmen. Additionally, Watkins has 1920 all-purpose yards and his 174 yards per game ranks fourth nationally, first among all freshmen and best in ACC history among frosh.

Watkins has three games of at least 150 pass receiving yards, already a Clemson career record, and he has five games of at least 100 receiving yards. He has accomplished this in 10.5 games, as he suffered a shoulder injury early in the third period against Wake Forest, then missed the NC State game. He returned against South Carolina on November 26 and will play in the ACC Championship Game against Virginia Tech this Saturday.

The native of Fort Myers, FL had a 345-yard all-purpose yardage game at Maryland, the fourth most all-purpose yards in ACC history and the most in Clemson history. He also had a 284-yard game against Georgia Tech. He has scored 11 touchdowns overall and needs just two to break C.J. Spiller’s Clemson freshman record of 12 set in 2006.

“Sammy was definitely a guy that we knew would have to help us, but it wasn’t until we got him into camp that we realized just how special he was and that he had a chance to be a starter and a game-changer, and that’s what he’s been,” Tigers coach Dabo Swinney said.