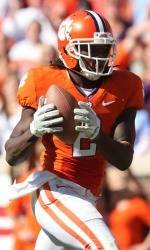 SOUTHAMPTON, PA – The Maxwell Football Club today announced the final additions to its 2011 Watch Lists for both the 75th Maxwell Award and the 17th Chuck Bednarik Award.

The original lists were comprised of 65 players, who were selected based on their performances during the 2010 season. As the 2011 season has progressed, the Club believes that several additional players warrant attention because of their noteworthy play.

Redd, a sophomore running back from Norwalk, Connecticut, leads the Big Ten in rushing with 869 yards on 165 carries (5.3) and 6 touchdowns. He has posted 4 straight games of over 125 yards rushing for the Nittany Lions.

Watkins has had a breakout season for Clemson. To date he has 54 receptions for 819 yards and 9 touchdowns. He is averaging 173.9 all purpose yards a game for the Tigers. Watkins is a true freshman and a native of Ft. Myers, Florida.

Amerson a sophomore defensive back for the Wolfpack leads the FBS ranks in interceptions with 8 for the season which is 3 more than his closest pursuer. He has tied the N.C. State single season record for interceptions that was set by Art Rooney in 1937 and again in 1938. He has had three games this fall in which he registered 2 interceptions and returned one for a touchdown against Virginia. He is a native of Greensboro, North Carolina.

The Maxwell Football Club will announce Semi-Finalists for the Maxwell and Bednarik Awards on Monday October 31,2011. Semi-Finalist voting will begin on November 1st.