If you ask Clemson fans to name the most important plays in the Tigers’ College Football Playoff games during this incredible five-year run, most would name the game-winning, two-yard touchdown pass from Deshaun Watson to Hunter Renfrow with one second left in the 2016 national championship game victory over Alabama. It is hard to argue with a national championship clinching play.

But I propose that the second-biggest play was Nolan Turner’s interception in the final minute of Clemson’s 29-23 victory over Ohio State in last year’s CFP semifinal game in the Fiesta Bowl. It came on a second-and-seven play from the Clemson 23 with just 37 seconds left in the game.

Turner was playing a safety position and was guarding Chris Olave, Ohio State’s top receiver in 2019 in terms of yards (849), yards per reception (17.5) and touchdowns (12).

“They had been driving on us and we were in the final minute. I was covering against the post pattern. It looked like Olave was going to run a post pattern and I was prepared for it, because they had been running double posts all night. I looked back to read Justin Fields’ eyes and saw him release the ball as he stepped into the pocket to avoid our rush.

“I don’t know if Olave ran the wrong route or broke it off because he thought Fields was going to scramble and I had the post covered. He broke to the outside, but Fields threw to the post. That was my cover and I saw the ball in the air and got it. It was my play to make.”

It was the third interception of Turner’s career. Incredibly, his first three interceptions came in postseason play. The first was in the College Football Playoff semifinal at the end of the 2018 season in the Cotton Bowl in Clemson’s 30-3 win over Notre Dame. The second was in the 2019 ACC Championship Game against Virginia.

The comparisons between Turner and Hunter Renfrow are not limited to making a big play for the Tigers in a playoff game. Their respective journeys to Clemson were similar.

Renfrow came to Tigertown as a walk-on after attending Clemson’s camp for years. He redshirted in 2014 before he was offered a scholarship in the August camp leading up to the 2015 season.

Turner was also headed for walk-on status at either Alabama or Clemson until Tiger defensive backs Mackensie Alexander, Jayron Kearse, T.J. Green and Travis Blanks all decided to forego their senior seasons after Clemson’s national championship loss to Alabama at the end of the 2015 season.

“I had known Nolan since he was born because I was teammates with his dad, Kevin, at Alabama,” said Head Coach Dabo Swinney. “Kevin was a great player who went on to play eight years in the NFL with the Patriots and Eagles.

“When I was in real estate (2001-03), we worked together for a company in Birmingham. In fact, I came with him to Anderson (S.C.) to help him with the opening of a shopping center, and that was the first time I saw Clemson. He was with me.

“Nolan used to hang out with my sons when we worked together in Birmingham. Then, when I became the interim coach in October 2008, he came to Clemson and worked on our staff as a graduate assistant.”

Swinney followed Nolan’s progress, but he did not have a scholarship for him as the fall of 2015 progressed.

“I really didn’t keep up with him much during his senior year of high school,” admitted Swinney. “Then, we lost all those defensive backs, and all of sudden I was in the market for some defensive backs.

“We were already recruiting Trayvon Mullen, but we got in late on Isaiah Simmons and K’Von Wallace. We needed one more, so I pulled up some tape on Nolan and said, ‘This kid can play!’

“I went down to Brent Venables’ office and showed him the tape. He said, ‘This kid is a baller.’

“I then called Buddy Anderson, Nolan’s high school coach, who I had known for a long time. I asked him, ‘What am I missing about Nolan Turner?’ He said it was so frustrating and didn’t know why college coaches weren’t paying attention to him.

“The next day, I drove to Alabama and offered Nolan a scholarship.” 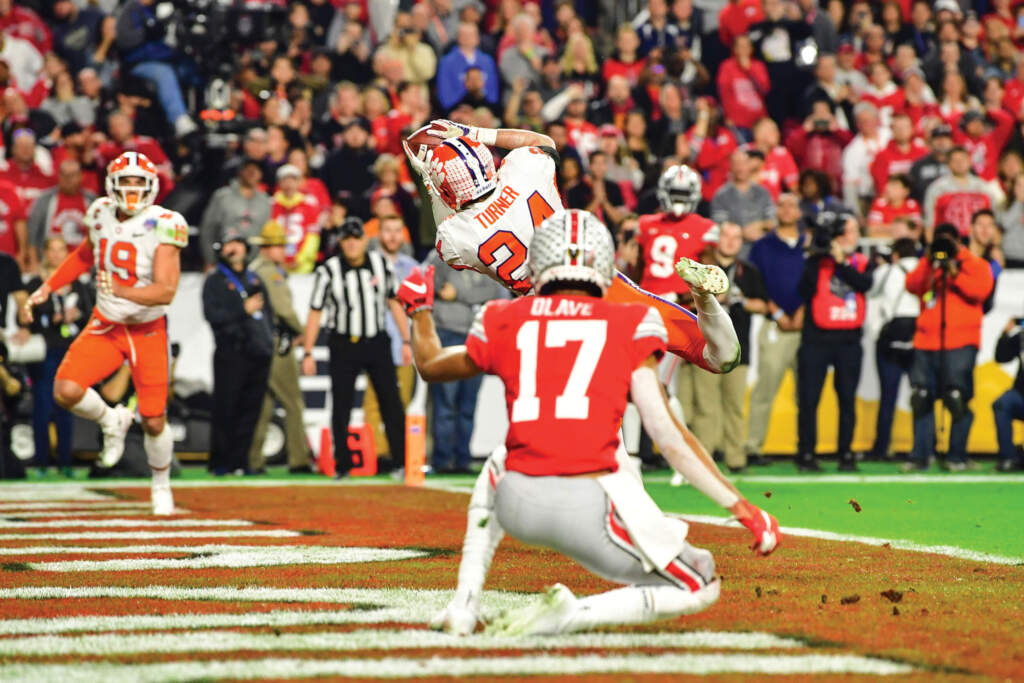 In 2010, Kevin was diagnosed with ALS, known as Lou Gehrig’s disease, which attacks the nervous system and has no cure. Kevin was in the late stages of the illness when Swinney came to Alabama to offer Nolan a scholarship.

Swinney told Kevin he was going to offer his son a scholarship before he made the offer in person to Nolan at Vestavia Hills High School.

Swinney was one of the speakers at Kevin’s funeral on Easter Sunday 2016, and he spoke about the special moment he shared with his former Crimson Tide teammate.

“Let me be realistic for a moment,” Kevin wrote to Swinney. “Most likely, I won’t see Nolan graduate, and there’s nothing you could’ve told me that would’ve made me happier than telling me a man of your character and integrity was going to be there for my son after I’m gone. I’m not scared of dying, but not being there for my kids terrifies me.”

Nolan, who shares the same jersey number (24) as his late father, has fond memories and took many positives from him.

“He had such a positive outlook on life. It was inspiring. He could not move or talk in his last days, but he always remained positive and never complained.”

The young Turner also learned a lot from his father when it came to the sport of football.

“He coached my little league teams and basically taught me the game. We talked football, scheme, defense and offense. He was a tough, physical fullback, and I try to model that style on the other side of the ball.”

Turner has certainly taken on that style as one of Clemson’s starting safeties. He has made a strong progression each year and was sixth on Clemson’s defense in tackles (66) in 2019. That included 12 stops in the national championship game. His 10 pass breakups tied for the team lead in 2019 as well.

You hear many Tiger players and coaches talk about the Clemson family. No one feels that more than Turner.

“My roommate is J.C. Chalk (grandson of former Alabama Head Coach Gene Stallings). We first met when we both went to an Alabama reunion at Coach Stallings’ ranch when we were in third grade.”

There is no greater example of the Clemson family than the relationship Turner has with his current head coach.

“This is a story of divine intervention, because so many things had to happen for him to get a scholarship here,” added Swinney. “Nolan is a great young man who has really developed into a very good football player. He is setting a great example for his sister (student at Alabama) and his younger brother (high school student and player).