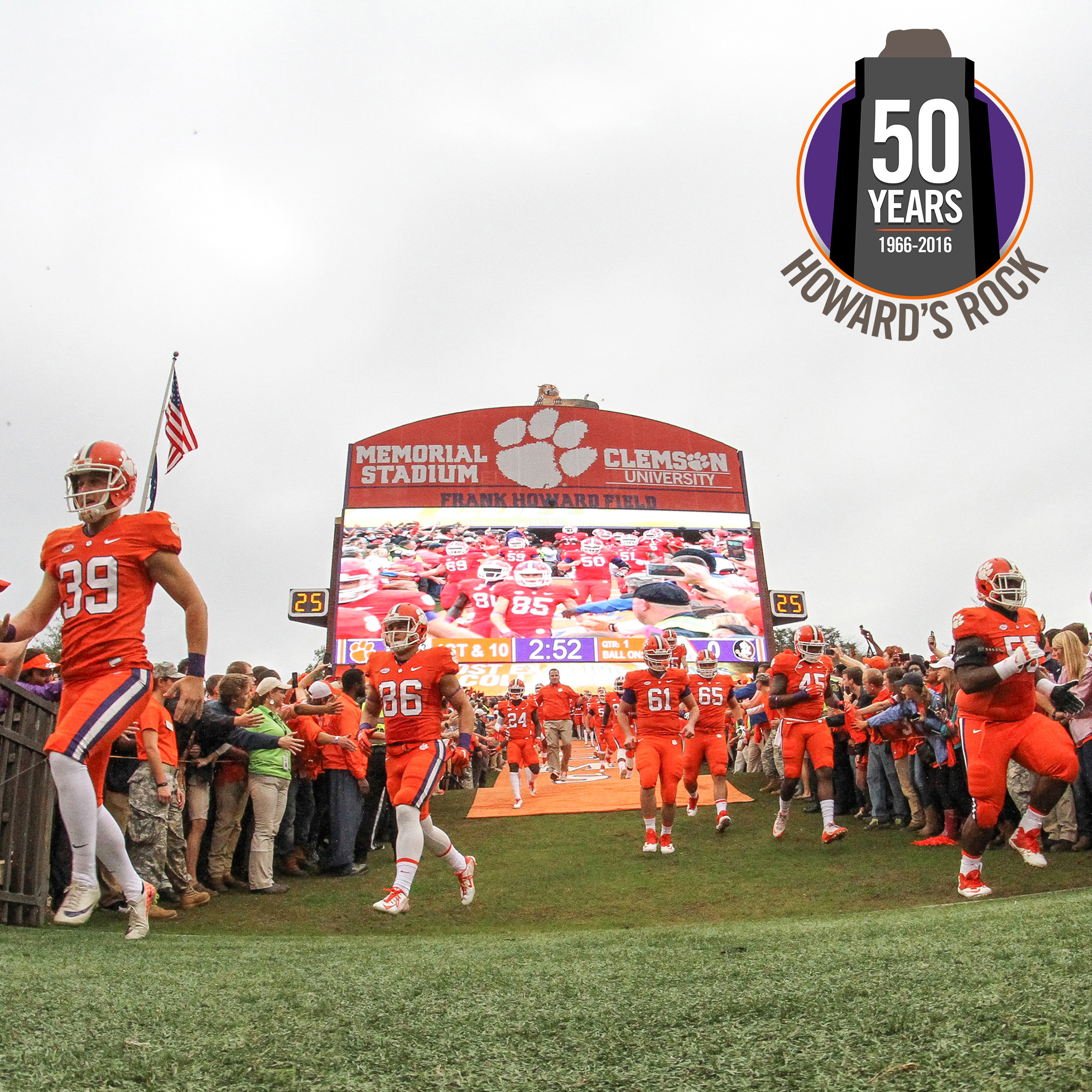 Running Down the Hill

(Editor’s Note—This month will mark the 50th anniversary of Howard’s Rock and it’s first appearance in Death Valley.  Howard’s Rock is not only an iconic symbol at Clemson but also in the college football world.  This is one story in a series that will appear this week in the Clemson Vault on ClemsonTigers.com about Howard’s Rock and the Hill.)

One of the nation’s most celebrated entrances for a football team is Clemson’s touching the rock and running down the hill. Described as the most exciting 25 seconds in college football started by accident and necessity in the early 1940s.

The first game in Memorial Stadium was on September 19, 1942 against Presbyterian.  The 40 Clemson players on the 1942 sophomore dominated team dressed in the basement of Fike Field House just like usual that day.

The team walked down Williamson Road, entered the stadium and went diagonally across the hill to the Clemson sidelines.  When the team arrived, the fans in attendance stood up and cheered. The team did calisthenics and pregame warm ups and then the game started.

Little did the 1942 edition of the Tiger football team know that an insignificant run down a hill to the field established a nationally known tradition that September afternoon.

Clemson inaugurated the new stadium in fine fashion with a 32-13 victory over Presbyterian.

The debut of the stadium came after a year of work by many people, including Howard and his players.

“I remember Coach Howard saying, ‘Some day you’ll be glad you worked on the stadium,'” recalled Bill Hunter, a member of the 1942 team and a former physician in the Clemson area in an earlier interview. Bill Hunter was a starting guard for the Death Valley opener.

“We didn’t think about it then, but I always heard the old players talk about working on the stadium. They were proud of it.”

On game day, work on the stadium was still going on. “The thing I remember most,” said Clemson Coach Frank Howard, “was that we hung the gates at 1:00 p.m. and played at 2:00 p.m. We barely finished the stadium in time to have the game.”

Howard gave his team an inspiring mission in his pregame talk, according to Hunter. “Coach Howard said, ‘Boys, this is the first game in the new stadium. Clemson will be playing on this field for many years to come. I want us to form a reputation that nobody wants to play at Clemson–I want to win all of them on this field.'”

The extremely enthused Tiger squad, then using some geometry, unknowingly began what is now the most celebrated entrance in sport: running down the hill. “We got dressed and came out of Fike Field House,” Hunter said. “The closest way to the stadium was the hill so we came down the street and ran down the bank the closest way–not down the middle like they do now, but the closest way, which was from Fike Field House diagonally towards our sidelines.

“The first time it was exciting to have those Clemson people there. Our fans stood up and hollered. That made you feel good.

“It was no different than it is now for the football team. It will always be a great feeling to run down the hill and into Death Valley.”

The determined Tigers had an easy time winning. Butch Butler gained 192 yards for the Tigers to lead the cause. He scored the first points ever at Memorial Stadium, bolting 75 yards in the first quarter for a touchdown.

The Tigers were proud after that game, according to Hunter.

“We were mighty glad about winning that first game,” he said. “We talked about that tradition Coach Howard had discussed. Charles Wright and Hawk Craig, who were the captains, spoke about that winning home tradition.”

Only 5,500 people attended that first game at the stadium, probably because of the war-time gas rationing.

After that season, all of that 1942 team went into World War II. Two members of the team, wingback Harry Franklin and end John Dixon, were killed during the war.

Many players distinguished themselves in the military such as Chip Clark, who flew bombers over Germany, and Hunter, who was a torpedo pilot off aircraft carriers, a fighter pilot, and a member of the famed Black Sheep Squadron for part of the war.

“It was a special and proud day for all Clemson people, but especially for the members of the first team to play in the stadium,” said Hunter.

“On the 25th anniversary of that game I invited all of them to come up here to my house, ” Hunter said. “Most of them came, and we talked well into the night.

“They are well aware they were first to play on the field. When you are the first to do something and it comes out to be a great tradition, that makes you feel proud.