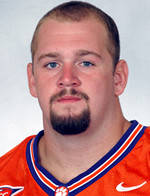 Roman Fry Out for the Season

Clemson, SC- Clemson starting offensive guard and Outland Trophy Candidate Roman Fry suffered a torn ACL in the first quarter of Clemson’s victory over Georgia Tech on Saturday night and will be lost for the season. The native of Ironton, OH has already red-shirted and thus his Clemson career is complete. He is on track to graduate in December.

Fry suffered the injury while pass protecting on Clemson’s third offensive play on Saturday evening in the Tigers 31-7 victory at Death Valley.

A mid-season first-team All-American by Sports Illustrated.com, Fry was listed by the Football Writers Association as a preseason All-America candidate and a candidate for the Outland Trophy. He started each of the first eight games this year for the 10th ranked and 7-1 Tigers and completes his career with 18 starts and 43 career games played. He was leading the Clemson team in knockdown blocks this year entering Saturday’s game with 62. He finishes with 215 career knockdown blocks over his four seasons.

“This is another big loss for our football team,” said Clemson Head Coach Tommy Bowden. “He will be difficult to replace on the field and in terms of senior leadership. When you look at our high national rankings in rushing, scoring and total offense, Roman has had a lot to do with it. We will certainly miss him.”

Chris McDuffie, a junior from Danville, VA, will move into the starting lineup at Fry’s guard position. McDuffie played 39 snaps against Georgia Tech after Fry’s injury.

Fry is the fifth Clemson player, the fourth starter lost for the season due to injury. Starting linebacker Tramaine Billie suffered a broken ankle during the preseason practice in August and will red-shirt this season. He will return for 2007. Starting linebacker and 2005 top tackler Anthony Waters suffered a torn ACL in the opener with Florida Atlantic and is lost for the season.

Starting wide receiver Rendrick Taylor suffered a broken arm in the win at Wake Forest and is lost for the season. Reserve defensive tackle Etta Etta Tawo played in the first five games, but will miss the remainder of the season due to a heart abnormality.

Bowden is optimistic that All-ACC wide receiver Chansi Stuckey will return to action this Thursday against Virginia Tech after missing the last three games due to a broken foot suffered in practice on October 3. Tight end Thomas Hunter suffered an upper body injury against Georgia Tech and missed the second half of that game, but he is expected to play against Virginia Tech.