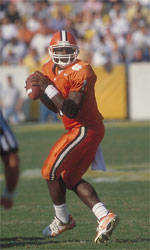 ATLANTA (AP) – The roles are reversed for Georgia Tech and Clemson.

A year ago, the Yellow Jackets were unranked when they pulled off a shocking 31-28 victory over No. 5 Clemson at Death Valley.

This time, Georgia Tech is ranked ninth and appears to be the front-runner in the Atlantic Coast Conference race. Clemson is out of the Top 25, all banged up and trying to forget about a home loss to Virginia.

“It’s good to sneak up on people,” Georgia Tech safety Jeremy Muyres said. “But I really like it when everyone is coming in trying to get you.”

It’s hardly been a dominating streak, with all four games decided by a field goal. In fact, nine of the last 11 meetings have been decided by four points or less.

“You’ve got two teams that are fairly close, geographically, so it’s a good rivalry game,” Tech coach George O’Leary said. “The last few years have been great games for spectators and stress games for coaches.”

Clemson (2-1, 0-1 ACC) dropped out of The Associated Press poll for the first time in more than a year after a 26-24 loss to Virginia, which scored the winning touchdown with a second left.

Georgia Tech was at that stage a year ago, when George Godsey directed an 11-play, 80-yard drive in the final two minutes for the winning touchdown – Kerry Watkins’ one-handed, 16-yard catch with seven seconds remaining.

Godsey set a school record by throwing for 454 yards, making an official break from the Joe Hamilton era.

“People didn’t really give (Godsey) the respect he deserves until that drive,” Watkins said.

These days, Godsey gets plenty of respect as the top-rated quarterback in the country. So do the Yellow Jackets, whose ACC prospects improved dramatically when not just Clemson, but Florida State as well, lost last weekend.

“It was definitely a shocker that both teams lost,” Muyres said. “It puts us in good position. As long as we take care of business, we’ll be in the driver’s seat.”

Clemson has already gotten itself in a must-win situation.

“If you want to win the conference championship, you won’t do it with two losses,” Bowden said.

The Tigers might have trouble getting back on track with injuries hampering a bunch of positions.

Take receiver, for instance. Jackie Robinson had a broken jaw wired shut this week and will miss at least four weeks. Kevin Youngblood broke his leg in August. Roscoe Crosby missed the last game with a sore knee. J.J. McKelvey and Matt Bailey also are hurting, which could force the Tigers to abandon some of their four-receiver alignments.

Defensively, tackles Nick Eason (sprained ankle) and Jovon Bush (bruised foot) will be limited if they even make it on the field. Safety Eric Meekins is questionable because of a pulled hamstring. Another safety, Marcus Houskin, already was lost for the year with a broken neck.

“We were kind of thin at some positions anyway, so it’s a little more costly,” Bowden said. “It just happens to be the first time since I’ve been a head coach that I’ve had this many injuries.”

Georgia Tech looks about as healthy as a team playing its season opener – which is what it feels like for the starters.

The Yellow Jackets wound up with a three-week break after the terrorist attacks shut down college football on Sept. 15. Already, many of the first-teamers had played sparingly in routs over The Citadel and Navy.

“We scrimmaged a lot and got back to a lot of fundamentals,” O’Leary said. “I thought we improved in some areas, some areas we need to improve on.”

Georgia Tech has another potent offense, but it’s the defense that has taken the biggest steps over the past two seasons. The Yellow Jackets, who have given up just seven points in each of their three victories, will focus on shutting down Clemson quarterback Woody Dantzler.

“He can cause a lot of problems running and passing,” Muyres said. “We don’t want to let him to beat us.”