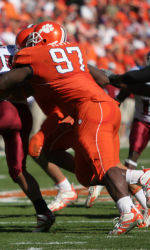 Richardson, Scott Ranked Among Top 10 in Position Rankings by The Sporting News

Clemson, SC – Clemson offensive tackle Barry Richardson and defensive tackle Dorell Scott are both ranked among the top 10 players in the nation according to position rankings in the 2007 preseason college football issue of The Sporting News. Running back C.J. Spiller was also named as one of the top 11 candidates for the Heisman Trophy and offensive coordinator Rob Spence is listed as the top offensive coordinator in the ACC.

Richardson was listed as the “most dominant offensive lineman” in the ACC according to the publication’s ACC section. The 6-7 offensive tackle is a second-team preseason All-American and ranked as the fourth best offensive tackle in the nation. Richardson had 75 knockdown blocks last year when he was a first-team All-ACC selection. Earlier, Richardson was named a preseason first-team All-American by Athlon, Playboy and Lindy’s.

Scott is ranked as the seventh best defensive tackle in the nation by The Sporting News. The rising junior led Clemson interior linemen in tackles last year with 65, including nine in the Music City Bowl against Kentucky.

Spiller is ranked among the top 11 candidates for the Heisman Trophy according to the publication. The rising sophomore had 938 rushing yards and 1415 in all-purpose rushing last year as a freshman. He scored 12 touchdowns to set a Clemson freshman record. Spiller and running back teammate James Davis give Clemson one of the top 10 backfields in the nation, best in the ACC, according to the publication.

Clemson offensive coordinator Rob Spence is cited as the top offensive coordinator in the ACC by The Sporting News. Spence guided the Clemson offense to a record 425 points. The Tigers led the ACC in rushing offense, scoring offense and total offense in 2006, the first time in 15 years Clemson led the league in all three categories in the same year. Clemson’s 6.5 yards per play figure also paced the ACC and was the best in school history for the course of a season.