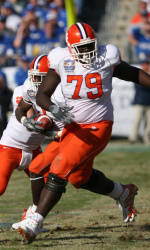 Clemson tackle Barry Richardson was named ACC Offensive Lineman of the Week for the second straight week as announced by the Atlantic Coast Conference on Monday, November 5. Against Duke on Saturday, the senior from Mt. Pleasant, SC graded over 90 percent for the second week in a row. In the 47-10 win, he played 45 snaps, recording 8.5 knockdown blocks and allowed zero sacks as the Tigers piled up more than 150 yards on the ground.

Other ACC Players of the Week:

OFFENSIVE BACK–Drew Weatherford, Florida State, Quarterback, 6-3, 215, Rs-Jr., Odessa, Fla. In Saturday’s night’s nationally-televised game at Boston College, Weatherford had a career night, leading the Seminoles to their first-ever road win over a team ranked No. 2 in the nation. For the night, he was 29-of-45 for 354 yards with two touchdowns and zero interceptions. The 354 yards were the second-most Weatherford has thrown for in his career.

DEFENSIVE LINEMAN–Chris Long, Virginia, Defensive End, 6-4, 284, Sr., Ivy, Va. Long was a disruptive force against No. 21 Wake Forest on Saturday, registering 10 total tackles, including two for loss, a sack and three quarterback pressures. With Long on the edge, the Virginia defense held the Demon Deacons to just 2.8 yards per rush and 315 total yards of offense in the 17-16 Cavalier victory.

DEFENSIVE BACK–Trimane Goddard, North Carolina, Safety, 5-11, 195, Jr., Robersonville, N.C. On Saturday, Goddard led a North Carolina defense that held a potent Maryland ground attack to just 93 yards and 2.8 yards per carry. He recorded 10 total tackles, including eight solo stops, and had one pass break up and one interception as the Tar Heels defeated the Terrapins 16-13.

SPECIALIST–Steven Hauschka, NC State, Placekicker, 6-2, 185, Grad., Needham, Mass. All of Hauschka’s career-high four field goals came in the fourth quarter or overtime of NC State’s 19-16 win over Miami on Saturday. His 47-yarder with 6:55 to play gave the Wolfpack its first lead of the day, and his 42-yarder in overtime sealed the win for NC State. Hauschka has now hit 14-of-15 field goals this season, and leads the ACC with a 93.3 field goal percentage.

ROOKIE–Rodney Hudson, Florida State, Offensive Guard, 6-2, 285, Fr., Mobile, Ala. Hudson played in all 81 snaps for the Florida State offense in the Seminoles’ 27-17 upset win at No. 2 Boston College Saturday night, and was the only offensive lineman to grade out above 80 percent. He recorded a team-high four knockdown blocks as the Florida State offense rushed for the second-most yards of any BC opponent this year and gave up zero sacks to the aggressive Boston College front seven.