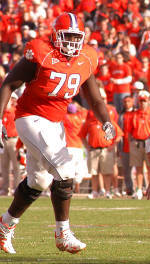 Barry Richardson is the highest ranked Clemson player according to the publication. The returning All-ACC tackle is listed as the fourth best offensive lineman, but rated as a first-team All-American by the publication. Richardson is also ranked as the 45th best player in the nation regardless of position and is ranked as the best pass blocker in the ACC. He is also ranked as the third best player in the ACC regardless of position and a preseason first-team All-ACC selection.