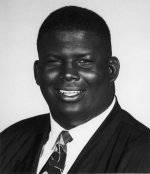 When you have worked 20 years at the same job, you are bound to walk away with some memories. I have a vivid memory of one Robert Jackson who greeted me my first year at Vickery Hall in 1991.

I was 37 years old then, the exact age that Robert was when he died on April 21, 2010 from heart failure. His funeral is today.

Robert was an explosive football player both on and off the field.

In my field of play, I was Robert’s teacher. As a freshman, he worked with me to improve his academic skills. Robert was bright, but he had great difficulty focusing on tasks, and it was a challenge for him to sit still in front of a computer for more than 10 minutes at a time.

Many a session involved me literally wheeling him back to his workstation with my hands pushing firmly down on his very broad shoulders and telling him, “Robert, you need to get this done. You are almost finished.” He usually replied, “But Gin, I have things to do …is my time almost up??” We survived that first year together and laid the foundation for a 20- year friendship.

Robert managed to stay in school for five more years. He continued to be challenged but along the way won over many friends and attached himself deeply to Clemson.

Robert finally returned to his hometown of Washington, DC and worked as a salesman and then as a college recruiter. Over the last decade, Robert would keep regular contact with me, calling me about once a month just to check in.

He always asked first about my family, and then we would move on to Clemson news…what the latest coach was doing, how the football teams’ prospects were or he would critique their latest performance.

But when the phone rang, and I heard Robert’s voice, I would always smile when I heard him say, “Gin, what’s goin’ on??” And then came the famous Robert laugh…deep and resonant.

This past year Robert began to experience serious health problems… acute back pain and then heart issues. The last phone call I had from Robert was a few weeks ago. He was still in a great deal of pain with his back and had been having to use a walker, but he was determined to return to work and just get through it.

That conversation was mostly me encouraging him to keep fighting through the pain and look to the future, and it ended with him saying, “I needed that, Gin. I knew there was a reason I called you.”

Working with student-athletes for two decades has been a rewarding experience. Here we are at the end of another year…saying goodbye to a set of graduates and greeting a new group of freshmen in a few months.

But along the way there come a few that stay behind. And Robert is one that will stay with me forever.