Unexpected. Regan Upshaw’s journey at Clemson has been nothing short of that. From a talented rugby player who had never seen the field as a football player to now a sixth-year senior who serves as a leader for the defense, it is safe to say that Upshaw’s experience playing for the Tigers has been unique.

His childhood sports were unlike what many of his teammates experienced. He was an avid rugby player and was skilled enough to where he could have eventually played professionally. Football was not in the list of sports he played, although the Upshaw family had a football background.

Football was a well-known sport in his household, since Upshaw’s father, who goes by the same first name, was selected by the Tampa Bay Buccaneers as the No. 12 overall pick in the 1996 NFL draft. However, that did not mean that Upshaw followed in his father’s footsteps. Despite the family history, Upshaw, along with his brothers, were not allowed to play football growing up.

“My dad didn’t want to push me and my brothers into doing what he did, which is why we weren’t allowed to play football for a long time. But I respect him a lot now seeing that he didn’t want to put that pressure on us, and thankfully we never felt any pressure from him about football.”

If Upshaw never played the sport before college, how did he end up playing for one of top teams in the country? Upshaw has his sister to thank.

His visit to Clemson was not planned. The Upshaw family was traveling from their hometown of Bradenton, Fla. to Brevard, N.C. to take his sister to a summer camp. Since Brevard is only a 50-mile drive from Clemson, Upshaw’s father asked if he was interested in visiting the Clemson campus. The Upshaws immediately fell in love with Clemson, especially when Upshaw’s father stumbled upon one of the football camps Head Coach Dabo Swinney was running.

“My dad was very impressed by the way Clemson did things and loved the culture here. As everyone in the country knows now, the culture here is special, and my dad saw that right away.

“He has been in football for so long from playing professionally, and he could instantly see the love the coaching staff had and the intensity that the players played with, and he knows that is the right way to play football. My dad said that he had never seen football coached like that and was impressed to see that passion.”

Upshaw had made his decision and knew this was where he wanted to be after visiting. His father was so impressed by the football program Clemson offered that he asked his son if he wanted to go to the camp the following summer. It was an immediate “yes” from the younger Upshaw.

The following year, he participated in Swinney’s football camp, catching the eye of the Tiger mentor. After a talk with Swinney, Upshaw had earned a spot on the team, but due to his limited football experience, Upshaw’s only option was to join the program as a walk-on.

Nevertheless, that did not stop him from joining the squad. Since that fateful decision, Upshaw has become known for being one of the hardest workers on the team, especially by his growth and work in the weight room.

It is clear that Upshaw did not waste any opportunities when it came to becoming a better player. In last year’s game at Wake Forest, Upshaw had his first breakthrough performance, and he finally got to see his last five years at Clemson start to pay off. Playing mostly on special teams his previous seasons, Upshaw entered the game with only 12 tackles in 26 career games. But on that night, after totaling just 41 defensive snaps the previous season, the fifth-year senior was on the field for 36 snaps and recorded four tackles and a sack to help lead the Tigers to victory.

The defensive end was given more recognition as well, with the honor of being placed on scholarship and being recognized as an NSCA Strength & Conditioning All-American. The now sixth-year senior has come a long way and is a respected and experienced leader of the defense, but he never lets anything change his mindset and has always stayed the course.

“I’ve continuously been the same guy, and I’ve always come with the same intensity since I got here six years ago. I always felt like I could be a leader. I never thought of myself as a walk-on and I never labeled myself. I know that it can be a harder journey coming in as a walk-on, but I try to have the attitude of when I step on the field, I’m the top dog.”

When asked about his favorite memories at Clemson and what he will miss most about playing football, Upshaw was quick to talk about his teammates.

“I have had the best teammates who have made this whole experience amazing. I will definitely miss the relationships here the most and being able to see my teammates every day.”

Although playing for Clemson was unpredicted for Upshaw, nothing ever felt like a mistake or a surprise to him. It all felt like part of the journey. 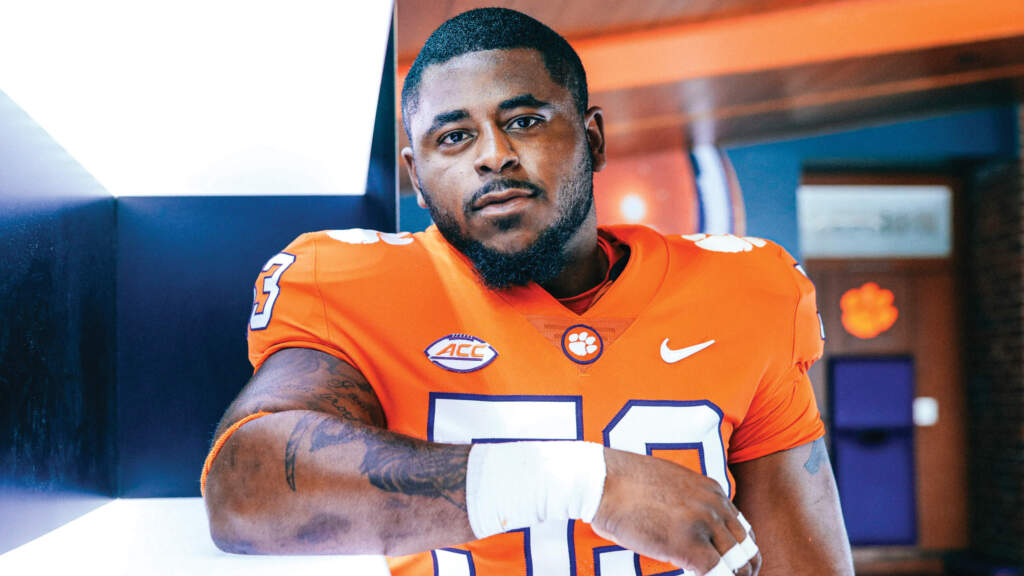