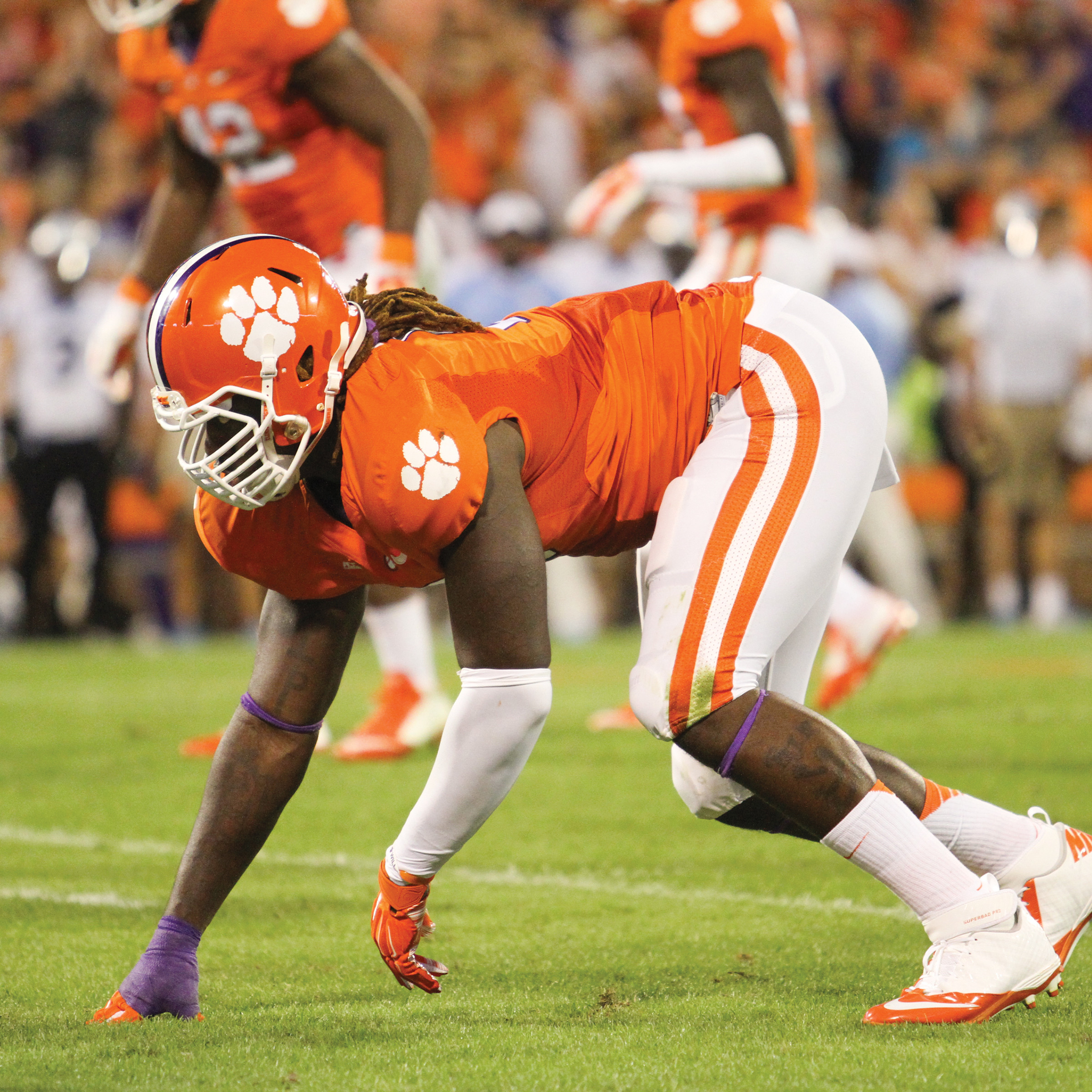 Clemson has been well known for its ability to produce quality talent on defense, especially along the defensive line, with past names like Michael Dean Perry leading the older generation, and Da’Quan Bowers, Andre Branch and now Vic Beasley at the head of a new generation of Tiger pass rushers.

But what can be often understated is the depth the Tigers have at defensive end, and senior Tavaris Barnes provides that much-needed depth.

A steady contributor along a stable group of defensive linemen, he has become a mainstay in the defensive-line rotation. He has earned his stripes through his career at Clemson, switching between defensive tackle and defensive end, finally settling on the end position while working his way up the depth chart at both spots. Like Beasley, he eventually found a home at defensive end.

With the plethora of options Clemson has at its disposal, Barnes knows that as a defensive end, opposing offenses will dictate their play by what they do.

“What many don’t know about being a defensive end is that the offense likes to play with the defensive ends’ eyes the most,” he said. “We’re some of the biggest, strongest and fastest guys on the field, and everything runs through us.”

But Barnes has taken more from Clemson than getting after the quarterback. He has become a better man, both on and off the field.

“My career at Clemson has really been a learning experience since my freshman year,” said Barnes. “I came in as a ‘hot head’ and thought I had it all figured out. As you become a senior, you mature a lot and you find out that no one owes you anything. You need to start working harder and you mature.”

“Coach (Dabo) Swinney, Jeff Davis and my wife, Shadarrell Tana Blackman, really helped me through that process. She’s always been there, she’s always believed in me and when I thought I was down and didn’t have anything, she was right by my side and lifted me up.”

Family is an important aspect for Barnes, who met his wife when he was a senior at First Coast High School in Jacksonville, Fla. They have been married for two years. Barnes credits her unyielding support for much of his growth during his time at Clemson.

“She’s been through everything with me. We lost a child together, been poor together and she has always been in my corner.

“My wife is the most loyal and real person I’ve ever known. She has loved me through everything I’ve gone through. She is a queen and deserves the world.”

The couple’s one-year-old daughter, Talayah Na’shae, has only reaffirmed Barnes’ deep family values and further inspires him to be a better man in all aspects of his life.

“My daughter is amazing and she’s one of a kind,” smiled Barnes. “She’s very smart and living in her own world most of the time.

“Ever since I saw her, I wanted to do better for my life. I always want her to know I’m here and will never leave her or want her to think I don’t want to be in her life. I take pride in my family.”

If there is something Barnes wants to teach and provide for his daughter, it’s to instill in her the kind of values that he has learned over the years, which has allowed him to become the man he is today.

“I want to align my daughter with God and want her to grow up respectful and to enjoy life.”

When his career at Clemson is finished, Barnes will continue an ongoing journey of his own, one that may not require rushing the quarterback, but one that he can forever take pride in.