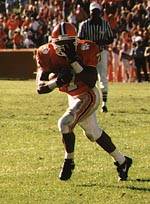 ST. LOUIS (AP) – On a record day for offense, no one was bigger for the St. Louis Rams than Tony Horne.

“That was so big, it’s almost biblical,” defensive tackle D’Marco Farr said of Horne’s 95-yard kickoff return to open the second half of the Rams’ 49-37 playoff victory over the Minnesota Vikings. “It’s like Tony Horne parts the TWA Dome.”

The Rams trailed 17-14 at the half – only the second time all season they’ve been behind. Horne, who had two scoring returns in the regular season and led the NFL with a 29.7-yard average, put them ahead for good on the opening play of the second half.

“Every time we touch the field, we expect something good like that to happen,” Horne said. “Everybody is looking for it to go to the house.”

It signaled the start of a 35-point run for the Rams, who led 49-17 in the fourth quarter before the Vikings got three late touchdowns.

“The momentum changed, no doubt,” wide receiver Ricky Proehl said. “He got us ignited, and we just exploded offensively.”

The return team faked a return to the right, with Horne cutting back to the left sideline. All three of his scoring returns have come on the play, which he refused to name.

“It’s kind of a secret play,” he said. “We’re just going to keep that confidential and let you all watch it.”

The Rams set up the scoring return by going to the right in all of their first-half returns. Lorenzo Styles sealed the back side and wedge man Andy McCollum got the final block on Anthony Bass to free Horne for a sprint to the end zone.

“I kind of stumbled at first,” Horne said. “But once I caught my balance, I knew nobody could catch me. All I saw was sideline.”

Horne became the first Rams player since Verda Smith in 1950 to return kickoffs for touchdowns in consecutive weeks, scoring in Game 4 and 5 in the regular season. Each were key to victories, the former providing breathing room in a 42-20 victory over the 49ers and the second return putting St. Louis ahead 21-7 at Atlanta.

Horne’s scoring return, the first-ever by the Rams in the playoffs, was one of several big plays for the Rams’ special teams. He also had a 36-yard return in the second quarter, with kicker Mitch Berger stopping him from going all the way.

James Hodgins recovered a fumble on Moe Williams’ kickoff return after Marshall Faulk’s 1-yard run gave the Rams a 28-17 lead in the third quarter. Az-Zahir Hakim had a 34-yard punt return in addition to catching five passes for 49 yards.

Players were perhaps inspired by special teams coach Frank Gansz, who quoted from Winston Churchill on his blackboard messages to players on Friday and Saturday. On Saturday the message was this: “Victory at all costs, victory in spite of terror, victory no matter how long and hard the road may be, for without victory, there is no survival.”

“That’s pretty strong, and I felt it was appropriate to us,” Gansz said.

Hakim took the words to heart.

“You always want to know what coach Gansz is thinking, and you want to be real alert in his meetings,” Hakim said. “It always inspires me.”

The only downside for the special teams was Jeff Wilkins’ field-goal miss in the third quarter. Wilkins has been hampered by tendinitis in his left knee.

The Rams’ coverage teams also were effective, turning Randy Moss into a non-factor on punt returns.