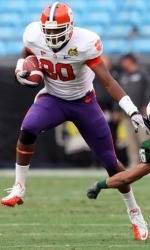 Mo Plancher also ran for a score for the Bulls (8-5), who took control after Tigers quarterback Kyle Parker left at halftime with broken ribs. South Florida secured its fifth straight eight-win season and earned its first bowl win over a team from a BCS automatic-qualifying league.

Parker’s final football game before embarking on a baseball career ended abruptly when broke ribs when tackled near the goal line at the end of the second quarter.

It was a triumphant return to North Carolina for Holtz, who left East Carolina in January to take over South Florida after coach Jim Leavitt’s surprise firing left a divided locker room.

After a slow start, the Bulls finished with wins in five of their last seven games and gave the beleaguered Big East a 3-1 bowl record.

Holtz had insisted all week he’d split the snaps at quarterback between Daniels, who had missed the regular-season finale against Connecticut with a thigh injury, and freshman walk-on Bobby Eveld.

But a steady Daniels didn’t need to share the offense, completing 20 of 27 passes for 189 yards and an interception. He locked up the MVP award when he zigzagged for the decisive score when he faked a pitch on the option.

After a rough beginning, Parker led two scoring drives to end the first half, the second included him escaping a sack and finding Jamie Harper punched it in from yard out to make it 17-13 at halftime.

The Tigers recovered the onside kick, quickly moved down the field and Boyd found Ford again for a 10-yard TD. But Clemson’s second onside kick was touched by the Tigers about a half yard short of the 10 it needed to travel and USF took over.