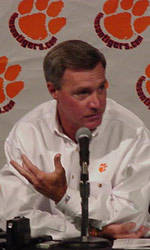 On the style of the Wake Forest defense: “They run three down linemen and five linebackers. They have three linebackers stacked behind two tackles and a nose guard. They have two glorified strong safeties. And they have a three-deep secondary. They rush three a whole bunch and drop eight, and sometimes rush two guys and drop nine into coverage. They play more like our defense and Virginia’s. They react and try to tackle you and take away the big plays. Virginia hit some deep balls against them.”

On injury situations: “It seems like we have had our share of season-ending injuries over the last few years. Usually you have some nicks and bruises. Yesterday, out at practice, Bernard Rambert, Yusef Kelly and Chad Jasmin sat out along with Gary Byrd and Kevin Youngblood. Defensively we are in a lot better shape than we are offensively. Those five guys are day-to-day, some worse than others. The least likely to play would be Youngblood with a hip injury, then Byrd with the sprained ankle and knee. Bernard and Yusef are the two best shots to play. Ben Hall only played four snaps last week due to a shoulder injury and I hope he will be ready to go this week.”

On how Clemson might respond against Wake Forest: “Any time you lose two in a row, there is concern. But nothing that a win will not cure. The biggest disappointment last week was the two turnovers in the fourth quarter and that we did not score more points when we had the opportunity on offense. We were doing some things that were productive, but the two turnovers were really costly in the fourth quarter.”

On the Wake Forest running game: “They are not a wishbone team, but the philosophy is very similar. They want to minimize your possessions on offense by running the ball and taking time off the clock. They lead the conference in rushing and are 15th nationally. They do a really good job taking time off the clock. They are run first and will force the issue. They will probably be the only team left on our schedule that takes that kind of approach.”

On the job Jim Grobe has done at Wake Forest: “Every time I see him, I tell him he ought to be in the Big Ten. He is from the Midwest, go back to the Midwest. No, I think he and his staff have done an excellent job running an offense that gives them a chance to be competitive. They are playing really good defense. They are a real aggressive team and are well-coached. I think their scores indicate that he has done a good job.”

On the punting situation: “I have to do something this week. I have it in my mind, but I do not want to publicize it at this time. I just need to see if it is verified in the next few days of practice. We will evaluate the situation really hard.”