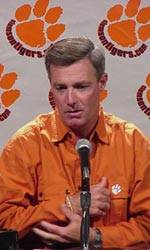 On N.C. State Quarterback Philip Rivers: “There is a presence about him as far as making plays. He seems to know where everyone is on the field. He plays with great tenacity. He’s the leader of the team. He will get after the defense, yell at offensive linemen and the wideouts. The team seems to have his personality. His father was a coach, and I’m sure that had something to do with it. His personality just seems to be intense, and that helps in this sport.

“As far as his throwing motion he reminds me of Bernie Kosar. He was pretty successful in the NFL.”

On N.C. State Freshman Tailback T.A. McLendon: “This guy is having a really productive season. I think a lot of it is because of their ability to throw the football. Any time you have the ability to throw the football, then you can force the underneath coverage to respect that. Then it really makes the running game a lot easier. But he is making big plays. For a true freshman, he comes in and has done some really good things.”

On N.C. State Special Teams: “I do not know the amount of time they put in on blocking kicks because I have never watched them practice. Their scheme is obviously productive, but they seem to go in there on a mission every time. Virginia Tech has that same philosophy. Sometimes they get a good push and let Terrance Holt jump up there and get them.”

On Preparation and being the underdog for Thursday night’s game: “I prefer being the underdog as opposed to being the favorite. Sometimes I think it’s easier to motivate a team that is an underdog. We’ve beat them two years in a row and now they’re highly ranked. There are a lot of things for our team to be motivated by.

“If I had a preference, I’d rather have the full week of preparation. You really have to make an adjustment when you go to a warped time frame. But, it is the same amount of time for both teams.”

On what a win over N.C. State would mean for Clemson: “It would mean a bunch. A lot of times you don’t get a second chance on national TV. We lost to Georgia in a close one, and then we had a second chance on national TV against Florida State. Now we get a third chance. You don’t get that very often in life. Beating a top-10 team in the nation would be a shot in the arm for your program’s confidence.”

On the matchup against a team like N.C. State: “There is no doubt that we will match up better against them than Wake because our offenses are similar in what we try to do. Nobody can really match up well against Wake because of the style of offense that they run. We do a lot of motion, whereas they do a lot of shifting. That will be a little bit different and unique. The drop-back passes and pass protection schemes will be more simple than Wake’s.”