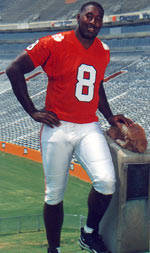 As unlikely pairings go, this one rivals Eminem and Elton John.

When he’s not trying to crunch quarterbacks, Broncos defensive tackle Trevor Pryce is busy with his record label, Outlook Music Co, which recently signed 16-year-old Melissa Lujan, a young singer hoping to follow in the footsteps of pop acts like Carey and Destiny’s Child.

Pryce, a Pro Bowl selection each of the last two years, has musical aspirations of his own.

Inspired by reggae icon Bob Marley and hip-hop pioneers Public Enemy, Pryce has been mixing beats for years and enjoys nothing more than using his computer to blend guitar chords with the sounds from his keyboard drum machines.

DJ Pryce in the house.

“I’m never bored,” he said Sunday while visiting with Lujan after Denver’s morning practice. “I haven’t touched my equipment now in probably two months, but it gives me a release like you wouldn’t believe.”

As a teen-ager, Pryce said he enjoyed creating an intense brand of hip-hop that sounded like “slowed-down death metal.”

Several years later, he is still pursuing the perfect bass line and hopes to eventually release an instrumental CD along the lines of electronic musicians Moby and Fat Boy Slim.

With a new seven-year, $60 million contract, Pryce’s music career will play second fiddle to football as he anchors a Denver defense that was often out of harmony last season.

Pryce had 12 sacks in 2000 but got little support as the Broncos finished 24th in total defense.

In response, Ray Rhodes was hired as the team’s new defensive coordinator and Denver also signed veterans Chester McGlockton and Leon Lett in hopes of creating a better pass rush.

“I think they made some great additions,” Pryce said. “They’ve taken a lot of pressure off of me – a lot. I do feel pressure. You all may not think I do, but I do. Every once in a while I feel the pressure of my head about to bust.”

Never was the pressure higher than a year ago when Pryce missed the first week of training camp because of a contract dispute. He returned without a new deal but followed up his All-Pro 1999 season with another strong year.

“He’s probably one of the most talented defensive players that I have been around in a long time,” said McGlockton, who went to four straight Pro Bowls from 1994 to 1997. “Even in my younger years, he is better now than I was at the same stage in my career.”

Entering his fifth season, Pryce said life in the NFL is getting easier. He no longer loses sleep worrying about the next day’s practice, and he works more on fine-tuning his game than overhauling it.

“There’s not much left to learn after you’ve taken in so much information,” he said. “You might learn something new here or there, but there’s no big learning curve anymore. I’m completely past that. It’s a lot, lot easier and I can enjoy that.”

Though his best years may be yet to come, Pryce already has grand plans for life after the NFL. Not only would he like to see his CDs on music store shelves, he says he would like to be president of Sony.

“If I’m vice president of Sony, that would be OK, too.”