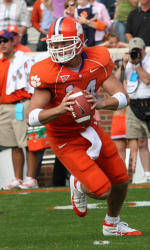 Quarterbacks Will Proctor, Cullen Harper and Tribble Reese combined to completed 34 of 44 passes for 416 yards and five touchdowns without an interception to highlight play in Clemson’s football scrimmage in Death Valley on Saturday.

The Tigers will conclude spring practice next Saturday when the annual Orange-White Game is played at Clemson Memorial Stadium at 1:00 PM. This was the final stadium scrimmage prior to that spring game.

The offense had the upper hand in the scrimmage that lasted for 110 snaps and over two hours. “Sometimes you have practices or scrimmages when one side of the ball dominates. The offense played very well today, but the next week the defense may be superior.

“Today the line blocked well, but the play of the backs and receivers stood out. We didn’t have any dropped balls that I could remember, the backs ran hard and the quarterbacks were accurate. We had just one turnover by the third team offense.”

Number-one quarterback Will Proctor completed 14-19 passes for 148 yards and two scores going against the number-one defense. He threw a four-yard scoring pass to Chansi Stuckey and a six-yard touchdown pass to running back James Davis. He completed his last six passes of the scrimmage.

Faerber led all receivers in terms of yardage with three catches for 92 yards. Chancellor and (4-15) and Chansi Stuckey, the top receiver in the ACC last year, had 3-46, including a 27-yarder, and Kendrick Taylor had 3-31.

Clemson was the only team in the ACC to rank in the top four in rushing and passing last year and the balance continued on Saturday.

Clemson running backs also had a solid day. James Davis led the way with 11 carries for 60 yards. He had a one-yard touchdown run and the six-yard touchdown reception from Proctor. Demerick Chancellor had 17 carries for 58 yards and two touchdowns. He also had one rushing and one receiving. Senior running back Reggie Merriweather played well with four catches for 22 yards and a 10-yard pass reception. Reserve Paul Macko had 8-35 rushing.

Freshman wide receiver Jacoby Ford was the only player who suffered an injury in the scrimmage. He suffered a foot injury that is not serious while making a 16-yard reception inside the redzone. He did not return, but walked off the field on his own power after the scrimmage. He had 2-27 receiving and 1-12 rushing before the injury.

Aaron Kelly was the only Tiger who missed the scrimmage due to injury. He suffered a knee injury in practice on Friday. He may miss the remainder of the spring.

While the offense was strong on Saturday, there were some good performances by Tiger defenders. First-team cornerback Duane Coleman was the top tackler with eight tackles and he also added a pass broken up. Defensive back Chris Russell, a transfer from Colorado, had six tackles, as did defensive tackle Dorell Scott and sophomore linebacker Antonio Clay. Defensive end Kwam Williams had two tackles for loss for 10 yards, while Rashaad Jackson had two tackles for loss for 12 yards.

Freshman defensive tackle Elsmore Gabrial was the only defender to come up with a turnover as he recovered a fumble.