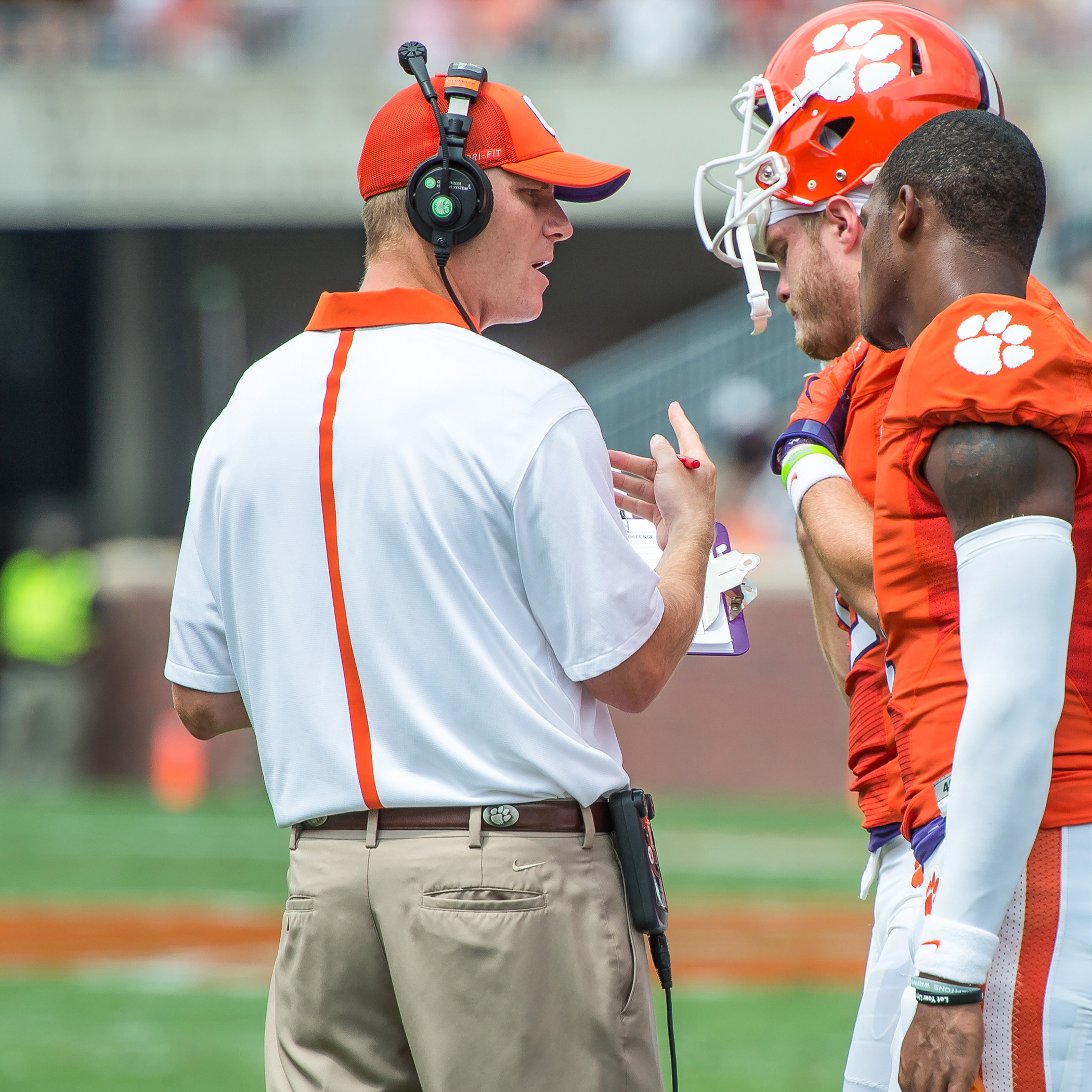 Yes, there’s something in these hills where the Blue Ridge yawns it greatness – Joe Sherman, Clemson class of 1934.

When head coach Dabo Swinney began a search to replace offensive coordinator Chad Morris, who accepted the head coaching job at Southern Methodist a couple of days after the 2014 South Carolina game, he had several actions to take. First, he promoted Tony Elliott and Jeff Scott to co-offensive coordinators.

The next step was to select a quarterbacks coach. The decision Swinney made would have pleased Sherman, as Swinney tabbed Brandon Streeter, a former Clemson quarterback and 1999 graduate, to coach the signal-callers.

When Streeter joined the staff in early December, he became the fourth member of the Tiger offensive staff (Danny Pearman – 1987, Tony Elliott – 2002, Jeff Scott – 2003) who played, graduated and coached at Clemson.

The choice that Swinney made allowed Streeter, a veteran of nine years as a full-time coach at Liberty and Richmond, to achieve a dream of returning to a place where he earned a degree in health science in 1999 and master’s degree in human resource development in 2001.

“It is so special that coach Swinney has put together a staff with so many Clemson guys,” said Streeter. “The common bond that we have really gives you even more passion because this is our school. We are able to go into a recruit’s home and tell him about our experience at Clemson. You can tell him what a great life experience Clemson is and how it will be with you your entire life.”

Elliott is glad to have Streeter back in Clemson for many reasons, including his Tiger ties.

“It is awesome to have Brandon back,” said Elliott. “There is no question where his passion is. He cares so much about the program and is going to do everything he can to make sure we are successful.”

Streeter had a unique opportunity this past December when he was hired and coached quarterbacks in the Russell Athletic Bowl. He went into the game with Cole Stoudt as the starter after Deshaun Watson underwent knee surgery following the win over South Carolina.

The first thing Streeter did was meet with all his quarterbacks. His first goal was to show confidence in Stoudt and let the senior signal-caller know he was in his corner.

“Cole went through a lot last season,” said Streeter. “He was in a place where he needed a clean slate. The first thing I told him was we were starting fresh and going to have fun. Cole did a great job of preparing. He knew he was going to prepare and earn it. The thing I wanted was for him to have fun and cut it loose.”

“Cut it loose” was exactly what Stoudt did that December evening in Orlando. He finished with a career-high 319 passing yards, three touchdowns and no interceptions en route to game MVP honors, as Clemson routed the Sooners 40-6.

“That was very rewarding for Cole,” stated Streeter. “Here was a guy who went through a lot with injuries and obstacles, and he kept fighting. I was so happy for him.”

It should not be surprising for Streeter to talk about overcoming injuries and adversity. A three-time letterman and two-year starter, he played just eight games in 1999 due to injury in Tommy Bowden’s first year at Clemson.

Streeter’s grit and determination was evident to all. In 1999, he was given the inaugural Brandon Streeter Award, which is still annually given in his honor to a student-athlete who has succeeded despite a physical injury.

With the 2015 season just underway, Streeter has had the opportunity to direct Watson, one of the most exciting quarterbacks in the nation. Watson is coming off ACL surgery and should feel comfortable in knowing his position coach has battled injuries and overcome them.

“One of the first things I did after I joined the staff was to meet with the quarterbacks individually,” added Streeter. “Deshaun and I talked about coming back from injury. I believe we are able to relate because I have sat in the chair he is sitting in today. He is a special player and a great person. His work ethic and determination in coming back from injury show the kind of character he has.”

That is the kind of character Streeter had as a player at Clemson and demonstrates today as a coach.