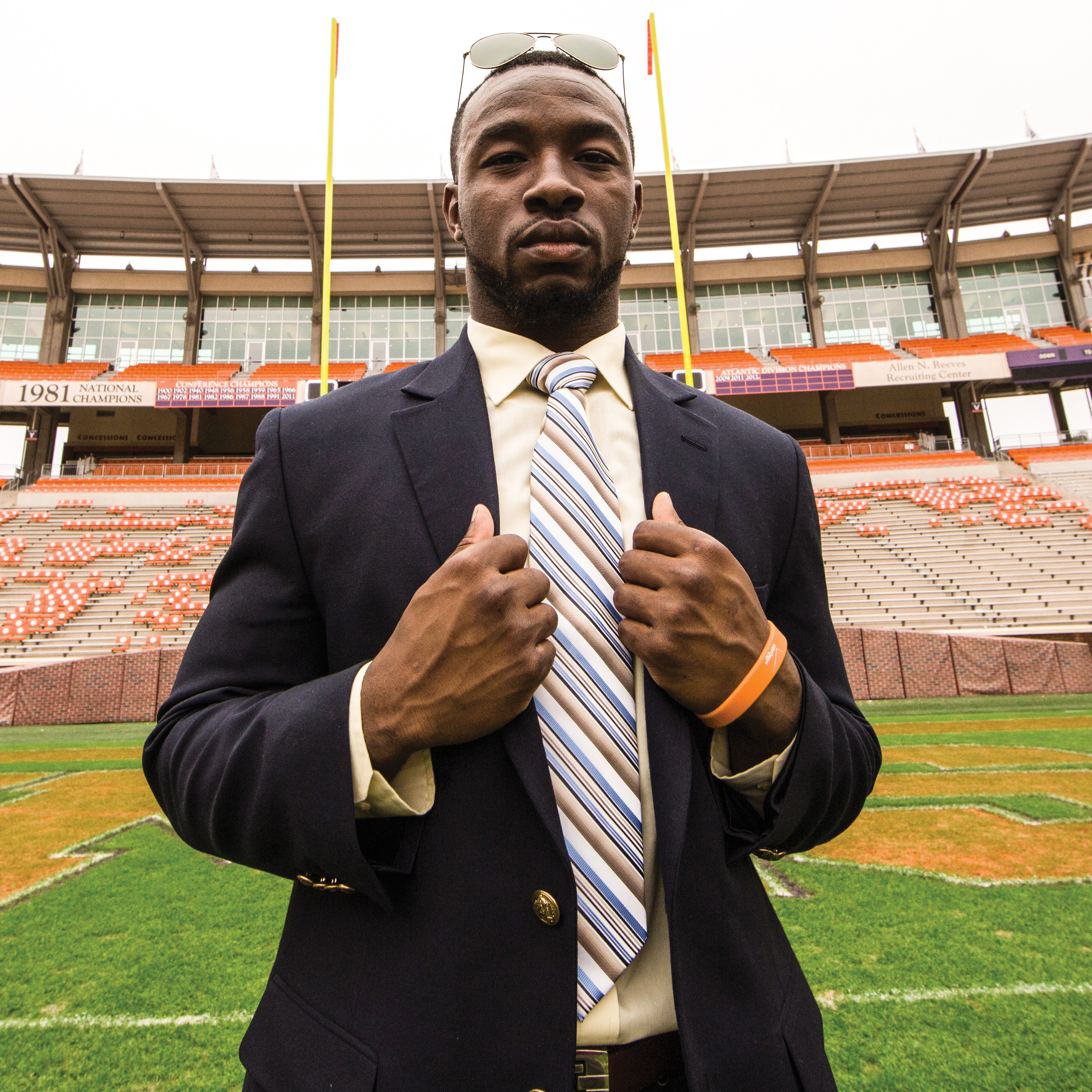 QB of the Defense

Tiger safety Robert Smith has a knack for finding the football. Smith roams around the Clemson secondary, anticipating the quarterback’s next move.

How does Smith know the opposing quarterback’s every move? He was the star quarterback at Woodland High School before he donned the Orange and Purple.

“Growing up, I was a quarterback,” said Smith. “I never even played defensive back until I came to Clemson. I would play a few snaps on defense in high school, but my dream was to play quarterback. In reality, I knew if I wanted to make it to the next level, I would have to switch positions because of my height.”

Highly recruited, Smith had the option of playing safety or running back as a Tiger and decided to move to the defensive side of the ball because of the potential for early playing time. While he did not see much action on defense during his freshman season, Smith competed in all 14 contests, primarily on special teams, and has played in every game of his college career. That is a rarity in college football, especially for a player in the secondary who delivers hits all season.

Smith is related to another former Tiger who made the switch from offense to defense. Tye Hill began his career as a running back before making the transition to cornerback. The switch paid off for Hill, as he was selected in the first round (No. 15 overall) by the St. Louis Rams in the 2006 NFL draft.

Hill embraced the opportunity to help his cousin become the next Clemson secondary star.

While playing every game, Smith was primarily used as a backup his first two seasons, working behind former Tiger and now Buffalo Bill, Jonathan Meeks. It was a tough transition for the athletic Smith, who had grown accustomed to being the star at Woodland High School. But after playing with some of the older players, Smith began to learn to be patient.

“It’s hard when you’re coming from being a big fish in a small pond to being a small fish in a big ocean,” admitted Smith. “I had a lot of former players like Jonathan Meeks, Rashard Hall, Coty Sensabaugh and Xavier Brewer who I really looked up to, and one thing I really learned was how to be patient and just wait for my time. They showed me how to read plays, helped with my footwork and where to keep my eyes.”

While Smith was familiar with Clemson due to the success of his cousin, the loyalty shown him by the Tigers ultimately led to his commitment. After earning a host of offers prior to his junior season in high school, Smith tore his ACL. Several of the teams that recruited him so passionately withdrew their offers. However, the Clemson coaching staff continued to vigorously recruit the coveted athlete.

“Clemson was one of the teams that offered me early and they didn’t back off,” stated Smith. “They told me if I tore my other ACL, they would still sign me.”

The dedication by the coaching staff has paid huge dividends for a defense viewed as one of the best in the nation. While many in the media are infatuated with the stout front seven, the secondary has played extremely well and is 14th in the nation in passing yards allowed per game (179.4).

Smith uses the “weak link” criticism to motivate not only himself, but his teammates in the secondary.

“That definitely motivates us because we don’t want to be treated as the weakest link,” said Smith.

“As the year has progressed, we’ve improved. We knew we’re going to start off a little shaky because there are so many young guys back there, but once they got the hang of playing in front of 85,000 fans, we knew we’d all see improvement.”

The improvement was obvious in Clemson’s win over NC State on October 4. The Wolfpack entered the game averaging 40 points and over 500 yards per game. But the Tigers pitched a shutout, thanks in part to a secondary that allowed just 35 passing yards, the lowest figure by a Clemson opponent in five years.

The youth and inexperience of the secondary has been a major concern for the Tigers, as many players are freshmen and sophomores. As the elder statesman along with Garry Peters, Smith is teaching the younger players the same way he was taught.

With his college career winding down, Smith is looking to his future. His dream since he was five was to play in the NFL, and after the past few seasons, he has demonstrated that he is capable of an opportunity. It doesn’t matter where he has to go, as long as he is suiting up on Sundays.

Does Smith wonder what the future would have held for him as a quarterback?

“I don’t regret my decision at all. A lot of people have recently been asking me, ‘do you wish you went to Georgia Tech or Appalachian State to continue your dream of being a professional quarterback?’

“Once I got to college, I was glad I didn’t play quarterback. Being 5’11” and having guys like Isaiah Battle at 6’7”, it’s hard to see over those players, so I don’t regret it at all. I feel like God put me in position to be the most successful.

“God had faith for me to be at Clemson in another way. When I came here, I couldn’t get (jersey) #15 because Coty (Sensabaugh) was wearing it. I didn’t care what number I got. Coach (Dabo) Swinney gave me #27. Ironically, my dad wore #42 in high school and I wore #15, and 42 minus 15 equals 27. I’m very close to my father and he’s my hero. So when I put it all together, the number meant a whole lot more to me.”

While the roster may never list “QB” next to his name, Smith is optimistic that one day he will get an opportunity to throw a ball in a Clemson uniform.

“That’s already in negotiations,” laughed Smith. “We might be up big and I might have a ‘pick-six,’ and Coach Swinney might say, ‘Robert, go throw a hitch route to Mike Williams.’

“If it comes true, that would be a blessing, but if it doesn’t, I’m still proud of my career I’ve had at Clemson.”