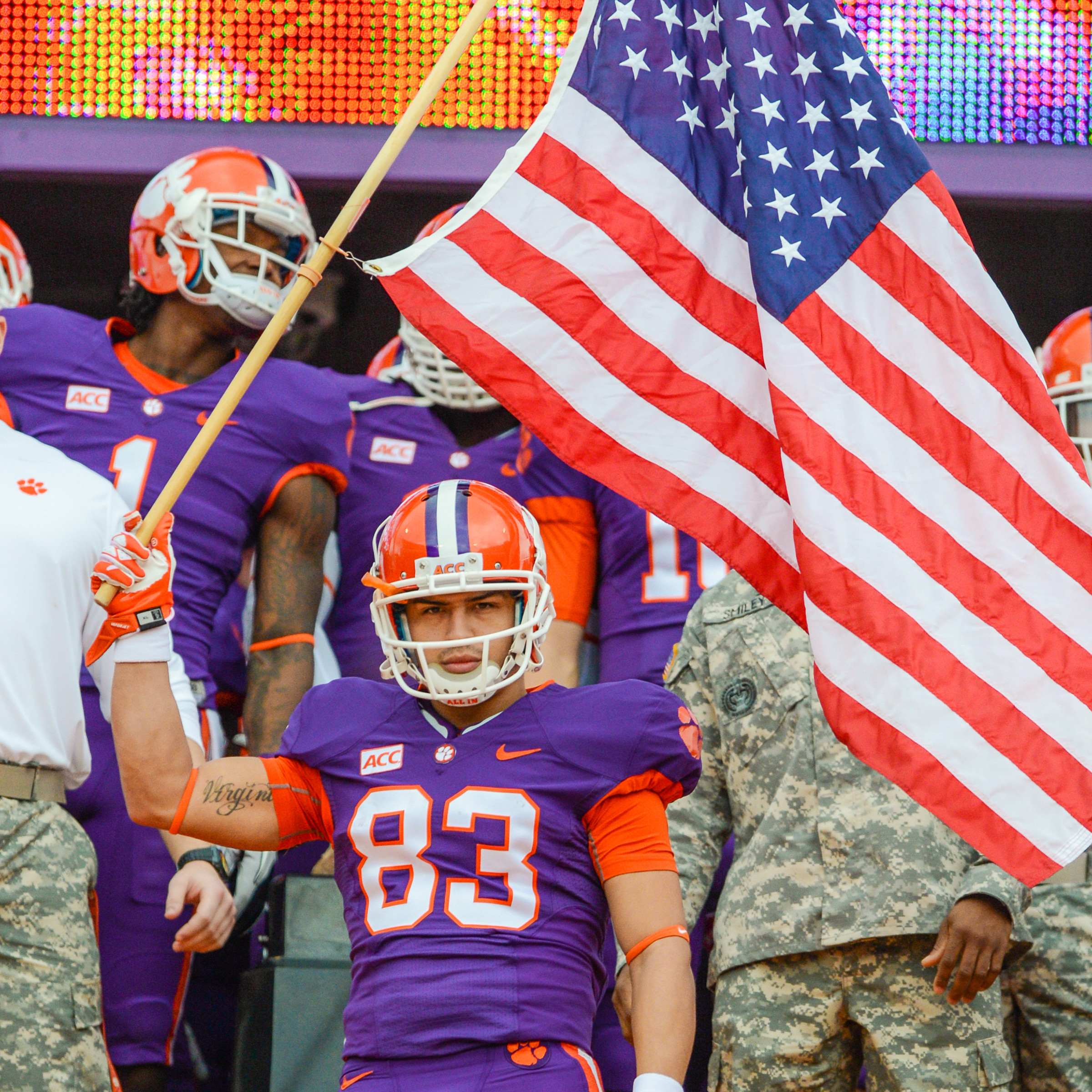 Football is often compared to warfare. The quarterback is the general leading his troops on the field of battle. The offensive and defensive lines clash in the trenches. Plays are referred to as bombs, blitzes and strikes.

Having served in Iraq and Afghanistan, senior wide receiver Daniel Rodriguez knows about war. He served two tours overseas, including an 18-month stint in Iraq and a year-long tour in Afghanistan, where he fought in the grueling Battle of Kamdesh on Oct. 3, 2009. During the battle, 22 American soldiers were wounded, including Rodriguez, who would later be presented a Purple Heart and Bronze Star Medal for Valor Device.

Returning to the United States, the Army Sergeant began to suffer from Posttraumatic Stress Disorder (PTSD), which took hold of his life.

“I burnt a lot of bridges with friends and relationships and there were a lot of things that were not right with me,” admitted Rodriguez. “I didn’t know why I lived and my friends didn’t. I felt like I could have done more on the battlefield to get friends home and it was a low place…a daunting time of my life.”

A former high school football player who loved the game, the then 24-year old focused his energy on getting stronger and dedicating himself to football using his training as therapy.

Rodriguez had made a promise to a friend in Afghanistan…that one day he would play college football. That friend, Kevin Thompson, was tragically killed in battle.

“Ultimately, keeping a promise to a friend was something to get me out of the dumps that I was in and I just focused on that and used football as therapeutic medicine. It was one of those things that whatever I did, I gave everything I had.”

After watching some high school highlight videos, the Stafford, Va. native decided to make his own. The video became a viral sensation. Rodriguez had no intentions of making the video public. The only reason he posted it on YouTube was to create a link to send to college coaches.

Impressed by the video, a member of the Clemson Board of Trustees, Smyth McKissick, sent it to Head Coach Dabo Swinney, who emailed Rodriguez to invite him to visit campus. Despite not knowing where Clemson was when he received Swinney’s invitation, Rodriguez found Clemson and fell in love with the picturesque campus.

While he thoroughly enjoyed the facilities, there was one aspect of Clemson that resonated most with Rodriguez…the character of the Tigers’ head coach.

“I had no question in my mind that he was there to develop men before he won football games, and that was something that I felt would be most beneficial to me, especially with my background with PTSD,” said #83. “I wanted someone who would show light on the development of a man instead of a football player.”

Upon arriving on campus, Rodriguez was given the opportunity to earn a position on the travel squad. After a difficult offseason, he was able to earn the trust of the coaching staff. When the 5’8”, 180-pound wideout stepped out on the field, he joked how he couldn’t believe how big the opponents were.

“I trained all summer and came into camp and had an opportunity to make the travel squad on the kickoff-return team, so I was on special teams right away,” explained Rodriguez. “We were playing Auburn in the Chick-fil-A Kickoff Game and I remember thinking, ‘Man, I hope he kicks it out of bounds’.”

Not only was Rodriguez playing football for the first time in five years, he had to learn a complicated offense. It was initially tough for Rodriguez to learn the playbook and to maintain the fast-paced tempo stressed by Chad Morris’ offense.

One of Rodriguez’s favorite memories as a Tiger was getting the opportunity to lead the team down the Hill before the Military Appreciation Day games the past two seasons. The “Purple Out” honors soldiers across the country who have been awarded the Purple Heart, an honor bestowed upon Rodriguez, who has vivid memories of the experience.

“First off, don’t fall,” laughed Rodriguez. “It was a humbling experience to represent veterans in the stands, across the U.S. and buddies who I had served with. And being able to lead the team down the Hill was an incredible feeling and it meant a lot to be able to do that.”

Rodriguez would reach a special milestone that day against The Citadel on Nov. 23, 2013. With time waning in the fourth quarter, the offense elected to go it on fourth-and-goal from the two. Quarterback Cole Stoudt sent Rodriguez in motion presnap and tossed the ball to him. Rodriguez sprinted into the endzone untouched for his first career touchdown, sending the crowd into a frenzy.

“It was a great feeling,” said Rodriguez. “I know why people want to spike the ball after scoring a touchdown, because I was so amped up. It was a good playcall, and just getting that first one was special.”

With his career as a football player winding to a close, Rodriguez admits that as he stands at the top of the Hill for today’s Military Appreciation Day game against Georgia State, he will be a little more emotional.

“At the end of the day, it has been a blessing to be able to do it,” he said. “I just want to cherish and live in the moment with the crowd. I will have family members and guys I served with at the game, so it will be special to represent them and the university. I will soak it all in as long as it lasts.”

After receiving his diploma in December and playing in the Tigers’ bowl game, Rodriguez will be making the trek to Los Angeles to assist with the production of a movie based on his life. The 26-year old does not know what the future holds, but he does know he will take advantage of every opportunity.

Rodriguez has a powerful message to Tiger fans before he embarks on his next journey.

“Being my last season, I couldn’t be more appreciative of how I’ve been embraced into this family and the culture here and the support,” smiled Rodriguez. “The love I have gotten everywhere I go has been unbelievable. It’s a place like this that keeps me in the state of mind of sanity. Being able to call this place home has been one of the best things for me coming back from war.

“I will always have a heart here and I cannot wait to come back after I graduate. Everyone who calls this place their alma mater will be a part of my family deep down, and I’m so appreciative of all of them.”

After a dangerous and difficult journey that ultimately led to Memorial Stadium, Rodriguez was able to keep his promise to Thompson of playing college football.

And now, Tiger Nation has a message for Rodriguez.

Thanks for risking your life to protect American lives and teaching the values of hard work and perseverance, and through tireless dedication, it is possible to achieve your dreams.