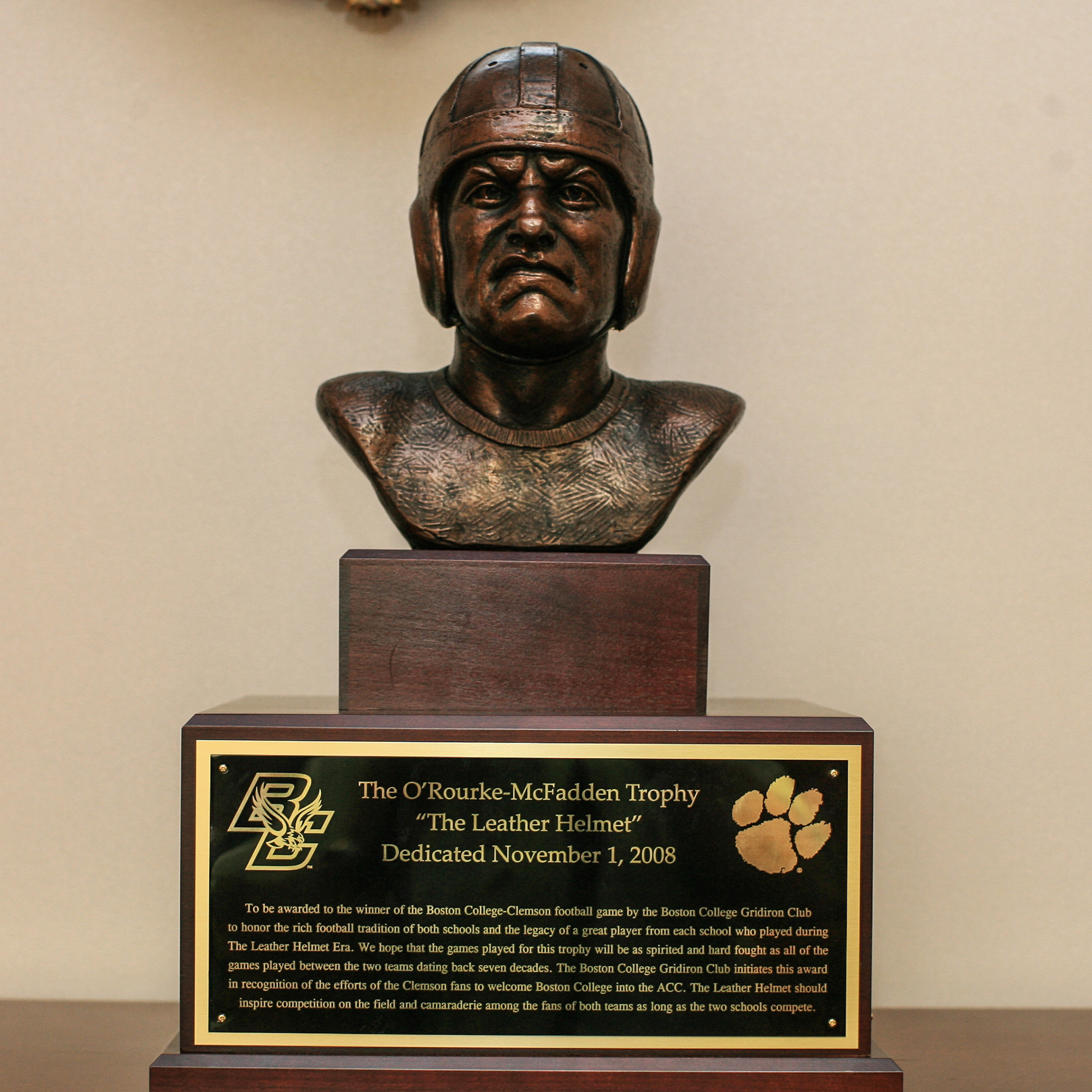 Tonight, Boston College and Clemson play for the O’Rourke-McFadden Trophy, and the MVP receives the Leather Helmet Award. The awards are presented each year by Paul Criscione, president of the Boston College Gridiron Club, a 1980 Boston College graduate who is passionate about the game of football and a man who has done much for the sport in New England.

It was his idea to have a trophy for the winning team and to present the MVP with a replica leather helmet, one that is the same as those worn by Charlie O’Rourke and Banks McFadden when Boston College and Clemson met in the 1940 Cotton Bowl in Dallas, Texas.

I applaud Criscione’s sense of tradition. That 1940 Cotton Bowl game and the play of O’Rourke and McFadden are a huge part of the foundation of both schools’ history.

Boston College was coached by Frank Leahy, who would coach at Boston College just two years, but he went on to lead Notre Dame to four national titles in the 1940s and would be inducted into the College Football Hall of Fame in 1973. Leahy is still second in college football history in terms of winning percentage, trailing only his mentor when he was a player at Notre Dame, Knute Rockne.

O’Rourke was the leader of the Boston College attack that year and the quarterback during the 1940 season. He was an All-American in 1940 when he led the Eagles to an undefeated season, including a Sugar Bowl victory over Tennessee. He was Boston College’s first All-America quarterback, and he was the first Eagle inducted into the College Football Hall of Fame.

Likewise, McFadden was Clemson’s first inductee into the College Football Hall of Fame. He was an All-America quarterback for Clemson during the 1939 season that led up to the 1940 Cotton Bowl.

Clemson won that first game against Boston College by a score of 6-3. It was a classic game of the era that featured strong defense and running the ball between the tackles. McFadden threw the ball just three times and completed two for 35 yards. He also rushed six times for 33 yards.

McFadden’s biggest contributions came on defense and in the punting game. Remember, players went both ways in those days, and he had four pass breakups from his safety position, including one on each of the last two Eagle plays. Boston College drove to the Tiger 11 late in the game, but McFadden and Shad Bryant broke up passes to preserve the victory.

McFadden was the classic triple-threat player of the era. In addition to his offensive and defensive accomplishments, he punted 11 times for a 45-yard average, including two boots over 50 yards that flipped the field late in the game.

O’Rourke rushed eight times for 41 yards and set up Boston College’s only score on a 27-yard punt return. This would be the last loss of O’Rourke’s career, as he led the Eagles to an undefeated season the following year.

Another star was Clemson back Charlie Timmons, who rushed for 115 yards and the game’s only touchdown.

Since Boston College joined the ACC in 2005, there have been some significant games between the two schools, games that determined the ACC Atlantic Division title and had an effect on the ACC Championship. There have been All-America players on both sides who have gone on to prominent NFL careers.

But no game was more significant to both programs than that 1940 Cotton Bowl, and no two players have been more important to both than Charlie O’Rourke and Banks McFadden.