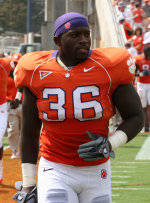 Note: This story along with many others will appear in Saturday’s game program. Be sure to pick up your copy.

Although he may not be able to trace his introduction to football to a particular person or event, senior fullback Cliff Harrell definitely knows who motivates him to continue playing as a Tiger.

Most young men playing college football are driven by the desire to break records and make as much money as possible. Harrell’s motivation comes from the dreams that his two parents had for him during his youth. A dream can be defined as an ambition or cherished desire that can provoke artistic and other forms of inspiration. Harrell channeled this dream into his ambition, as he played football at North Florida Christian Academy in Tallahassee, FL.

“Playing sports kept me out of trouble,” recalled Harrell. “I hung around the wrong crowd when I was growing up, and that was the reason I had to attend a private school. I hated it at first, but I used football as my motivation to keep me out of trouble.”

North Florida Christian Academy won three state titles during the last three years that Harrell played. “We always had the passion for greatness,” he explained.

Harrell personally shined on the football field, and acquired all-state, all-conference, all-area, and all-region honors during his sophomore, junior, and senior seasons. As a linebacker, Harrell totaled 106 tackles and four interceptions for his career. As a senior, he amassed 1,075 yards rushing and scored 16 touchdowns. He finished his career at the academy ranked as the #32 player in Florida by SuperPrep, and the #1 fullback in the state by Florida Times Union.

Due to his positive experience at North Florida Christian Academy, Harrell decided it would be a good idea to play college football away from his home area so he would continue to focus on the tasks at hand. Today, he will play his last Clemson game in Death Valley against his hometown foe, Florida State. He knows that being a Seminole would have negated everything that he had worked so hard for at North Florida Christian Academy.

“Florida State was never an option for me, because it was a must that I get out of town. I knew that I had to leave Tallahassee so I could continue to do well. I didn’t even hear about Clemson until Coach (Rick) Stockstill came to recruit me. He sold me on the traditions of Clemson football.”

Harrell has been a strong contributor ever since he came to Clemson. He has played in 45 games entering today’s game, including eight as a starter. He has just six career rushes, but his blocking from the fullback position is one of the reasons Clemson’s rushing attack has improved by almost 50 yards per game so far this year.

He has maintained his motivation to be the best player he can be. “I’ve lost nearly 40 pounds since I came here, and that was because I wanted to become a better player. I’m striving to be as good as possible. Although this offense does not use the fullback as a runner, I don’t get discouraged. I focus on how I have gotten to this point, and hope that I have the opportunity to play at another level.”

Harrell’s drive and determination have never been an issue at Clemson. “Cliff Harrell has been a leader and a great example to the younger players,” said Head Coach Tommy Bowden. “He works hard every day and is always prepared to play.”

Harrell’s personal family story explains why he had such an outstanding high school career and has continued that strong work ethic during each season in Tigertown.

“My true love of football came at a more somber time in my life, but it has brought about some truly good times for my life,” said #36. “My father used to pick me up after school and we would play football together. We always had one special football that we would play with all of the time.

“But, he got cancer when I was nine, and at that age I didn’t know what it was, what it could do, or to what extent he had it.

“He passed away when I was 10, and my stepmother told me that I could have anything out of his house that I wanted. Out of everything there, I knew exactly what I wanted; it was that football that we had always played with. Until about the age of 15, I always kept that ball with me. I even slept with it all of the time. I continued to play football, because I knew that it (the sport) was something that he wanted me to do.

“With my father’s death, my mother and I became really close. We began to watch football games together every weekend, attend high school games, and each year we would watch the NFL draft together.

“When I was 15, I found out that my mother had breast cancer during the earlier part of the year, but they found it at an early stage, and they were able to catch it. After a short time, she got better, so I assumed that the cancer was gone. Later during that same year in the summer, she began to get sick, and I didn’t know that she had cancer again.

“I had gone through the entire spring training and had no idea about what was going on. The team has a barbecue to celebrate the upcoming season with our parents. During it, my mother would not eat anything, and she was extremely sleepy.

“That was the day I really got the feeling that something was not right. By the end of the night, she couldn’t even drive, and my first time ever driving was that night, because I had to drive us home. It was that night that my family finally told me that she had acquired cancer once again.

“Right then, football was no longer important to me. Camp was coming up, and I was just ready to give it all up. I did not want to be away from her, but she would not let me give up the one thing that I really loved. She talked me into going to camp.

“Every day while I was there, I called her at least twice a day. One day, I called her in the morning, but I forgot to call her that afternoon.

“I remember walking onto the field for my afternoon practice when the head coach called me over and told me that I needed to go home. I automatically knew that something was pretty bad, because we were an hour away from my hometown, and one of the coaches drove me all the way back.

“When we finally got there, I found out that my mother had passed away earlier that afternoon.

“I knew right away that I had to make the decision to either return to camp or stay with my family. I learned that football was my true love that day, because I decided to go back to camp and live out my mother’s dream for me.”

Harrell’s siblings and other family members attend each of his games, and they will be here today for his final home game. His family can attest that his parents’ dream is no longer a cherished desire, it has become a reality.