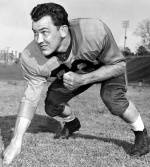 The following story appears in the game program for Saturday’s matchup with Duke. Be sure to pick up your copy on Saturday.

The Last Word By Brent Breedin

The 50th reunion of Clemson’s 1955 football team two weeks ago was a happy occasion for those of us associated with that team. On the eve of the Temple game, the players and managers and then-outgoing SID (yours truly) recalled what it was like to be a Clemson Tiger 50 years ago before, during, and after the banquet staged by the athletic department at the Ramada Inn.

The joking and telling of tall tales that accompany such gatherings ended abruptly at Howard’s Rock at noon Saturday when Event Coordinator (and 1955 team co-quarterback) Charlie Bussey notified those planning to run down the Hill just prior to gametime that 1955 starting right guard John Grdijan would not be with them. He had died in his sleep that morning.

I learned of John’s death moments earlier while roaming about the press box. The immediate sorrow quickly returned to even fonder memories than those of the night before. I could see a small bus pull up in front of the old athletic department building in late August of 1954, and a motley looking group of young men pile out. There were about 20 of them – all from Western Pennsylvania high schools.

A “talent scout” acquaintance of Coach Frank Howard had sent them as a followup to his success in providing Clemson with the likes of Walt Laraway, Joe Pagliei, Leon Kaltenbach, and Dick Marazza in 1952-53.

The roster thinned out in a hurry, but a week or so before classes began, the Anderson IPTAY Club staged a dance for the new freshmen, and the one who stood out in my mind was Grdijan – the best dressed, the best dancer, the happiest looking individual in the Anderson Recreation Center. He was also the oldest, at age 22 or 23, having served three or four years in the Army. And, except for a positive attitude, he was one of the least prepared for college class work.

Let’s flashback to the state of Pennsylvania in the first half of the 20th century (1900-50). Its population was second only to that of New York (state) throughout, and its public school system was highly structured. By eighth grade, maybe 80 percent of the students were preparing for careers in local businesses or in vocational fields. Such curricula eliminated most from college possibility – even if their performances in competitive high school athletic conferences might otherwise have made them attractive to college coaches.

Grdijan fell into that category, but his maturity, work ethic, and desire to get ahead enabled him to overcome lack of academic preparation and a five-year absence from the classroom. He would earn his degree from Clemson in five years, get a position with Martin Aviation in Orlando, FL, and move up the ladder to vice-president of human resources. He had retired to DeLand, FL at the time of his death two weeks ago.

John’s contribution to Clemson football consisted of three seasons (1955-57) of first-string play at right guard. Playing both offense and defense at 200 pounds, he made All-ACC in both 1956 and 1957, and was team captain during the 1957 season. He never lost to the Gamecocks, went to the Orange Bowl with the 1956 team, and in 1957 led a Clemson team to its first-ever victory over an opponent ranked among the nation’s top 10 at season’s end – Rice’s Southwest Conference champion Owls, who were #7 in the final Associated Press poll of 1957.

There were five Pennsylvanians among the 22 starters on the 1955 Tiger team – Grdijan, Marazza, Pagliei, Laraway, and Kaltenbach. Such high school talent of that state had helped local colleges and universities like Pittsburgh, Penn State, Pennsylvania, Villanova, Carnegie Tech, and Duquesne finish among the top 20 on a regular basis when the AP polling began in 1936.

This did not go unnoticed by coaches in the South, limited as they were in manpower prior to and immediately following World War II. Segregation removed almost half of these states’ potential players from consideration. Along with basic economics (the “Great Depression” and post World War II adjustment) and limited coaching skills in the high schools, most college football teams below the Mason-Dixon Line needed to supplement their talent pool. Pennsylvania became the mother lode.

Clemson’s Walter Cox, a young assistant coach who was an all-state guard on the Tigers’ 1939 Cotton Bowl team, recalled Coach Howard putting him in charge of recruitment in Pennsylvania upon his return from military service in 1946. McKeesport High School, coached by Neenie Campbell, had a championship team at the time. Most of the players wound up in the South, including halfback Ray Mathews and guard Dan DiMucci at Clemson. Mathews lettered four years in football and baseball, sharing with Fred Cone the distinction of having starting roles on two undefeated teams (1948,50). Jim Reynolds, another Keystone State product, also lettered for the Tigers four times between 1945-49.

Coach Howard’s appetite for more players like Mathews, Reynolds, and DiMucci after his successes in using such talent to reach the heights from 1948-51 resulted in his unusual arrangement with the scout who began sending talent to Clemson in 1953.

With seven new coaching staffs from 1970-99 and an end to segregation, Clemson has lessened its dependence on Pennsylvanians for the most part – though Brandon Streeter, whose father is still the head coach at Gettysburg College in Pennsylvania, quarterbacked the Tigers from 1997-99 and is now a video assistant here.

Still, one is reminded on such occasions as the recent death of John Grdijan of what things were like a half century ago.

The story was told well in an early Tom Cruise movie “All the Right Moves” in 1982. Variety wrote at the time, “A smash directorial debut by well-known cinematographer Michael Chapman, “All the Right Moves” crackles with authenticity. The story is centered on characters fighting to get out of a dying Pennsylvania steel-mill town to make a better life for themselves.”