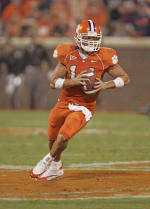 Will Proctor is expected to start for Clemson against Duke today in place of Charlie Whitehurst, who has a sore shoulder. Whitehurst has missed time in practice off and on since the Boston College game due to the shoulder soreness, but this will be the first time he has not started at quarterback for the Tigers since October 24, 2002.

Proctor has thrown just 13 passes in his Clemson career, and has completed five for 80 yards and a touchdown. He has appeared in just 11 games in his career to this point.

You can follow today’s game online with GameDay Central