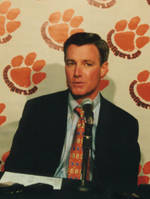 Clemson Coach Tommy Bowden “Woody did not have his usual good day and had a couple of picks in there.

If you want to win, a lot of good teams will have to go through something like this and have a close ballgame.

We turned the ball over several times and most of the time in close games, you’re going to lose those. N.C. State had two-and-half weeks for preparation and they didn’t turn the ball over.

You take those three turnovers away and you’re looking at more than 600 yards in total offense and possibly a couple more scores and we’re right back at our average. We’ve got to correct the turnovers. We’ll have to study that hard.

Teams have gotten to where they try to take (Gardner) out of our game. Rod wanted to get some balls and some media exposure. He made some critical, critical receptions out there.

I really thought the crowd was a factor. It was large and it was loud.

They have a great offense and a great quarterback. It came down a fourth-down play and it came to a third-down play where we had them and stopped them, which shows Dantzler’s great play-making ability. But if we had stopped them, we’d probably be out there in overtime right now.

I’m proud of my young men. I’m proud of them. They just fought, fought and didn’t give in. That shows character.

That’s an awful good football team – both offensively and defensively. It was a battle of two quarterbacks.

It was a photo finish. To bring an 18-year-old leader who kept his poise and made the plays he made. (Koren) Robinson is a big-play man. We told them about the situation (the fake field goal) because they did a couple of weeks ago at Virginia. They did it a few years against the team I used to coach for (Florida State).”