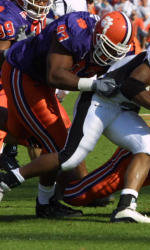 Polk is entering his sixth season with the organization after beginning in 2006 as a pro personnel assistant. He served in that capacity until 2008, when he became a college scout covering the Midwest region and conferences such as the Big Ten and MAC.

The Clemson graduate played for the Tigers under Tommy Bowden from 2000-03. He played on four bowl teams, including the 2000 and 2003 teams that finished the season in the final AP top 25.

In 2009, Polk moved back into pro scouting, where he has been responsible for scouting all professional leagues, 16 NFL clubs and advanced scouting of upcoming opponents.

“DeJuan has a done a fantastic job for us during his time here,” General Manager Thomas Dimitroff said. “He has a tremendous work ethic and an acute eye for talent. He is a value to our organization and I am proud to promote him to Coordinator of Pro Personnel. We believe he has a bright future and we are happy to have him part of our personnel team.”