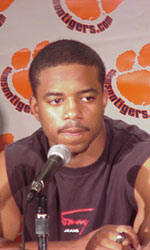 Four players, Charlie Whitehurst, Mark Jetton, Chip Myrick and Bobby Williamson, missed the morning practice as they were in class. All four have gotten a head start academically, taking courses in the second session of summer school. But, all four were in attendance for the afternoon session.

An unusually large number of media covered the practice, the first for the large and highly regarded recruiting class. Much of the attention centered around wide receivers Roscoe Crosby and Airese Currie and tight end Ben Hall. All three were ranked among the top 10 players in the country at their position by various services.. Defensive linemen Trey Tate and Maurice Fountain also received much of the media’s attention.

“We have a lot of athletes in this class,” said Bowden. “I saw some big and fast defensive tackles and some talented skill position players. It is good to see such a large class. We need a lot of these young players to help us this year.

“Roscoe Crosby is an impressive and confident young man. He seems to be mature for 18. He has blended in well with his classmates. Ben Hall will give us another position we can use in our offensive attack. He will team well with Todd McClinton as far as having a big tight end who can make a play.

“There is a lot of work to be done. I don’t look out there and pick players who will contribute or start right away. We do have some areas on our football team where we need help. I really want to have two productive guys at wide receiver. We saw Rod Gardner double teamed all the time the last two years. We need balance from the wide receiver position.”

One of the visitors to the afternoon practice was former Clemson Head Coach Danny Ford. Bowden invited Ford to attend a practice during the preseason drills, so the coach of the Tigers 1981 National Championship team dropped by to view Clemson’s new class. The freshmen continue workouts on Tuesday. They will have academic meetings all day on Wednesday.