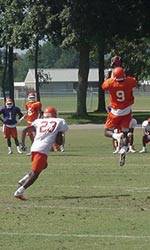 Pictures, Audio, And Recap From First Day Of Full-Squad Practice

The Tigers had 105 players present for the workout. Only one player was sidelined in a yellow jersey. That was offensive lineman Nick Black, who is nursing a sprained ankle and was on the sidelines for both practices.

Despite the hot temperatures in the morning, as hot as 90 degrees, no injuries were reported. The team worked out for nearly three hours in the morning and for 2:45 in the afternoon.

Overall, Bowden was pleased with the first day. “It was the best first day since I have been at Clemson,” said Bowden. “I saw aggressive play out there, especially in the morning practice. We wore shoulder pads in the morning and there was good hitting pad to pad.”

Clemson players would engage, but not take the opposing player to the ground during the workout in the morning. The Tigers did not wear shoulder pads in the afternoon.

Clemson will work twice on Saturday then take Sunday off for Fan Appreciation Day. Three players will miss the morning practice in order to go through commencement exercises. Bowden will excuse quarterback Woodrow Dantzler, defensive tackle Nick Eason and defensive back Charles Hafley. They will return for the afternoon practice.

“We congratulate all three of these players,” said Bowden. “It is impressive, especially for Nick Eason, who is doing it in three years and a couple of summers. Willie Simmons has a chance to do that to. It is quite an accomplishment for all three.”