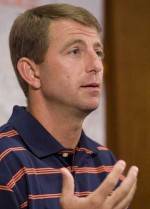 Head Coach Dabo Swinney and members of the Tiger football team and staff held their first weekly press conference on Tuesday, September 1 to preview the upcoming Clemson vs. Middle Tennessee football game. Click on the GALLERY link to view pictures from the press conference.

Click on the link below to watch the press conference on TigerCast:

Swinney Press Conference QuotesOpening Statement: “I am excited about playing some football. I don’t know about you, but it seems like it has been the longest preseason ever. I am excited about opening up at Death Valley.

“We are getting ready to play a very good Middle Tennessee team. I have been calling them Clemson North simply because they have at least nine guys that either coached, worked or played here on their staff. These are guys that will really understand Death Valley and really understand playing here.

“I have a lot of respect for Coach (Rick) Stockstill. He is one of the best guys in the business. Willie Simmons lived in my basement for six months when he was a GA here and is now coaching running backs for them. They have a lot of Clemson connections.

“This is a good football team. They beat Maryland last year and Maryland beat us so that is all you need to know. They lost to Mississippi State, Kentucky and Virginia by single digits over the last two years. It is a team that has played with some very big programs. They are a very capable bunch. I do think we have had very good preparation. I like where the team is right now, we have a very focused bunch and they are ready to play.

“We have to play with tremendous effort every play. You have to take care of the football. If you look at the last part of last season when we didn’t take care of the ball we lost, and that is something we have stressed in the spring and the preseason. Hopefully that will show on game day. That is a critical factor in every ball game.

“The quarterback decision-making will be critical. Our offensive line’s ability to recognize and adjust to what happens in the course of a game will be important, because you have to prepare for a lot. The type of discipline you play with up front will be a big factor in the game and you have to minimize penalties. I think that’s always a critical part of the game.”

“Defensively we need to stop the run. I know Tony Franklin is their coordinator and we talk about the true spread they use. They will spread you out to run the football. Tony got Auburn ready in about 10 days when they beat us in the Chick-fil-A bowl in overtime two years ago. If you remember that game they really hurt us with the draw so us being able to stop the run is critical.

“You talk a lot about passing and that’s important because they are going to throw the ball all over the place, but they really want to run the ball if they can. Their quarterback played running back for them previously. This guy wasn’t the starter last year, but he started several games the year before. He is a veteran player and has played a good bit of running back in his day so he is a guy we have to contain.

“We can’t let their quarterback do what he wants to do and make big plays with his feet. I think the other side of that is they don’t give up a lot of sacks and get rid of the ball quickly, so how you match up is important. When a team spreads you out you have to be able to tackle and minimize yards after the catch because you are going to have to play in space.

“Special teams is another area that is critical, it is something we have worked hard on. I will be highly disappointed if we don’t play well in that area. In a game like this it is something like a fake punt or blocked kick that you have to be aware of in any type of opener because you have been able to study a lot of the opponent schemes. They are good on both sides of the ball and have seven starters back on both sides. I think it is going to be a true test for us.”

On Clemson starting quarterback Kyle Parker: “He is a very poised young man. He has a tremendous arm, is accurate and is an outstanding decision maker. We have had a very competitive situation here so you have to make decisions based on what you see in practice. He has just been the best guy. He has been very consistent all spring and fall camp. He has earned the right to be the starter. Has big play capability with his arm and his feet. He has the ability to run the ball and is a tough kid. I am excited about him. I think he is a real winner.”

How different do you think it will be for Parker in front of 80,000 fans rather than 10,000? “Kyle is a very even keel kid. He is steady all the time and doesn’t really get overwhelmed with anything. I think the baseball experience helps him a little bit. When you step in the batters box and there is a guy throwing 90 mph at you there is nowhere for you to hide, and it is a long walk back to the dugout after you strike out. It is just a difference atmosphere.

“Kyle was struggling going into the baseball regional last year, but then he it the single that sent the team to the Super Regional. I think that shows what the kid is made of. He will be fine. Especially at home where you have friendly fire. ” How different is this year’s team than last year’s team?

“I hope we are very different. I will leave that up to you all to talk about and write about. I know that it is different players, coaches, offseason, spring ball, summer, camp, and voices. I think from where we were in the middle of the season, we should be a very different football team. We will find out Saturday.

Is there more or less pressure than last year? “Probably about the same to be honest. Every game you want to win no matter what. You only get 12 Saturdays and it is pressure to win every week. When it all comes together you want to win so there is always that pressure. I put a lot of pressure on myself, so I don’t feel any outside pressure. I want to get it done because we all work hard and our fans deserve it. Anytime you sit in this seat it is the same.

On Jacoby Ford’s injury: “He has not been cautious the last several days. It is always something you worry about with a skill guy, but he has practiced great and worked well. He was out there last night working with Chris Chancellor and Crezdon Butler on getting some extra release work. He seems great.”

On Richard Jackson as starter at kicker: “He is going to be the guy we go with this week. I let him call his own shot last night. He kicked if from the right hash from 53 yards out and it went through the uprights. He has become more and more consistent and has done a good job. Spencer Benton has had a little pull and been out of the battle for a week or so. Jackson took advantage of that and will be the starting field-goal kicker/place kicker. Right now Spencer will do kick-offs and Zimmerman will be punter.”

How much did you know Coach Stockstill? “I knew him from recruiting. He was always one of the good guys. He was one of the first guys I met on the road, when I started recruiting for Alabama. We had a lot in common. He did a great job at Clemson for a long time whether it be in coaching or recruiting. He has done a great job with the Middle Tennessee program. He has gotten their APR up and generated a lot of excitement.”