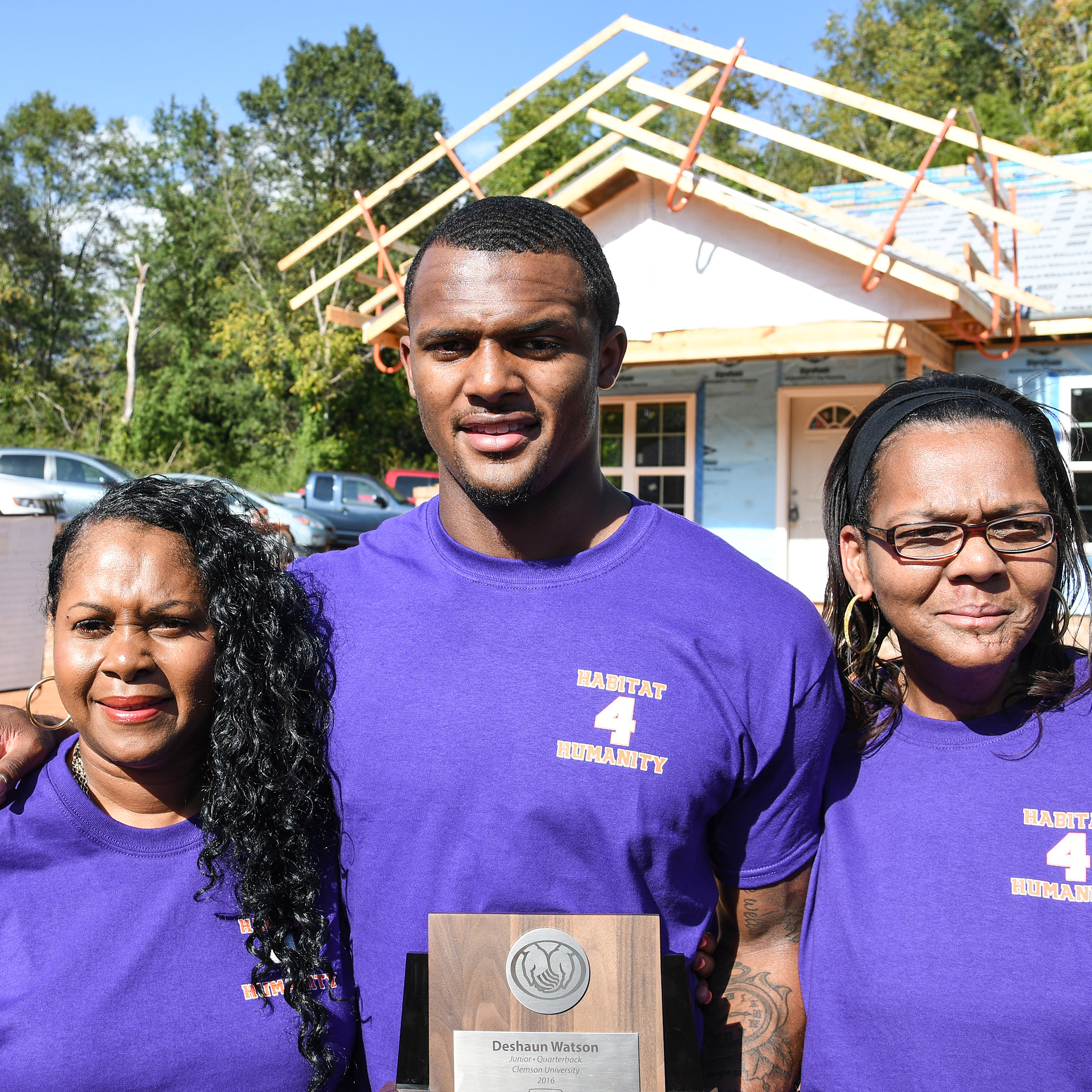 Preparation is key. Doing the right thing will lead you down a positive road. Work hard and the rest will follow. Clemson quarterback Deshaun Watson grew up on these principles.

While they weren’t the only mantras he used, the Gainesville, Ga., native remembers those words being instilled in him by his mother at a young age.

“My mom has always been there giving me great advice. She would never tell me anything that would lead me down the wrong path.”

From a young age, Watson also understood the importance of family. A majority of his time was spent with his siblings, two brothers, a sister, his mom, his aunt and uncles in a home that was built by Habitat for Humanity.

Since becoming a Tiger, Watson has given back, helping other families in need by building Habitat for Humanity houses with his teammates and coaches. That dedication is one of several reasons Watson was named to the AFCA Good Works team, which recognizes players who dedicate their time to bettering the community and the lives of others.

“Growing up, we always stuck together regardless of the situation we were in,” said #4. “There is never any negativity going around. We always travel together. It is a great family atmosphere, especially at games.

“My older brother was a great football player, and he is always there supporting me. It brings him great joy to see me play and produce at this level.

“My younger brother and sister like getting to watch me do what I do while they are still in high school and following their own dreams.”

Watching Watson produce at Clemson has been the ride of a lifetime for his family. The quarterback holds 43 school records, making him one of the most decorated Tigers in history.

Watson showed great toughness during the 2014 season, his first as starting quarterback. Playing through an ACL injury, he led Clemson to its first victory over rival South Carolina in six years.

However, high-profile games were not always a part of Watson’s tale. He began as a humble kid who enjoyed the rush of backyard football.

“I remember getting my start when I was six or seven years old,” said Watson with a smile. “I was a young kid, flying around the yard, not really knowing the techniques of the game. Back then, the only thing that mattered to us was having fun.

“I still try and make my journey about having fun, because if you’re not having a good time, what is the point?”

After a few years of playing backyard ball, Watson got his shot to play quarterback in eighth grade. By the time he was a high school freshman, he was first string on the varsity squad at Gainesville (Ga.) High School.

“I was 14 years old playing with guys who were 17 and 18 years old. It was very different for me, but at the same time, I knew I was ready and prepared.”

He earned the title of No. 1 dual-threat quarterback in the nation by ESPN. This accolade gave him the opportunity to be recruited by a number of high-profile universities. But in his mind, there was only one perfect fit.

“Clemson is the place that fit me, especially with the coaching staff. I knew that I wanted to come here and help take the program to an elite level.

“It is also close to home, and I fell in love with the Clemson staff and the environment they create here.”

While the game did not have the outcome many Tiger faithful hoped, Watson stated he still has work to do before he leaves.

“I think I have done pretty well so far, but I still have a lot to accomplish in my time here. It will all take care of itself if we keep putting in work and having fun with it day-by-day.”

One thing that Watson has enjoyed in his time at Clemson is the chemistry of his teammates. Without them, his experience would not have been the same.

“Before I got to Clemson, the team was in good shape with a lot of great leaders who are playing in the NFL right now. They made sure everyone was doing right on and off the field.

“Now in my third year, the atmosphere has been great. We have no problems off the field and all the guys are awesome.”

His teammates often remind Watson of the advice his mother gave him as a kid.

“She would always say, ‘Show me your friends, and I’ll show you your future.’ This meant that the people you surround yourself with are going to lead you to your future.

“If you surround yourself with negative people doing bad things, your future will go in that bad direction. Luckily, the guys on the team do positive and good things, so our future is pretty bright.”

Watson also holds close ties to a friend who he grew up with in Georgia. Their lasting friendship allows him to push himself to be the best person he can be.

“Fred Payne (defensive back for Western Carolina) has been a big influence in my life. We grew up together. He is always there for me through good and bad times.”

Watson’s future is bright, as his dreams of entering the NFL draft come closer and closer to reality.

“I am excited to have a shot to go to the NFL and see where that takes me. I would love to have the opportunity to see what I could do at the next level.”

When that door closes, Watson is still on the fence on where he wants his talent to take him next.

“After the NFL, I don’t have a set plan of what I really want to do. I want to see where my degree and football take me. I like traveling and being able to experience different places. It all comes down to what I fall in love with.”

One thing that is not up in the air is the way he wants to be remembered, not only by his teammates, but fans as well.

“I want to be a guy who gave 110 percent on and off the field…a true leader who inspires others.

“I love to help people at any age, and I want to show that through my life. I also want to be known as a guy who has always been thankful for the opportunity to be at this great university.”

In his life, Watson has had many people reach out and influence him to be the man he is today. If all else fails, he hopes to give back in the way that people have given to him.

“I have had a lot of people give to me, show me the ropes of how to be successful and be thankful for what I have. When I leave Clemson, I want to use my platform to give back and help others follow their own journey.

“The kindness of people changed my life, and I want to be able to do the same for someone else.”