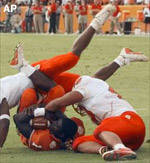 In order to ease parking and traffic problems for Saturday’s football game between NC State and Clemson, which coincides with the North Carolina State Fair, the NC State Department of Athletics and the North Carolina State Fair have established peripheral parking locations for fans and fair patrons. Visitors to both venues may park and utilize a bus shuttle service to sites.

A park-and-ride service will begin at 8:30 a.m. at two locations. These locations are the First Union Building on Corporate Center Drive and at the park-and-ride location for NC State University adjacent to the McKimmon Center off of Western Boulevard at Gorman Street.

These shuttle buses will operate from 8:30 a.m. until 11:00 p.m. at no charge for the participating public. All patrons will be delivered to Youth Center Road adjacent to Gate 8 of the State Fair and Carter-Finley Stadium. The return service will be staged at the same drop-off/return site.

Carter Finley Stadium parking gates will open at 8:00 AM for NC State football parking permit holders only, one hour earlier than usual. Stadium entrance gates will still open 1-1/2 hours prior to kickoff.

Fans attending the noon game should also keep in mind that the security measures implemented two weeks ago will remain in effect throughout the 2001 season.

These measures include: No large purses, bags, coolers, strollers, backpacks or any other object deemed hazardous by stadium management personnel will be allowed into the facility. All smaller bags are also subject to inspection prior to entrance as will seat cushions. Pass outs will be limited to Gates 2/3 on the west side and 8/9 on the east side of the stadium. Re-admittance will be allowed only with a ticket and pass-out stub. Those who exit the stadium will be inspected upon return Fans are asked to bring a photo identification to the game.