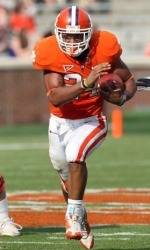 CLEMSON, SC – Demont Buice and Roderick McDowell both had at least 100 yards rushing to lead the Orange to a 25-13 victory over the White Team in Clemson’s annual Spring Football Game at Clemson Memorial Stadium on Saturday. The game, played in front of an estimated crowd of 25,000, concluded spring practice for Dabo Swinney’s Tigers.

Clemson’s ground game was the highlight of the offense in the contest, as Buice had 18-102 and McDowell rushed 12-100 for the Orange team. D.J. Howard had 11-97 and a touchdown for the White team. Swinney divided his roster evenly for the contest that included 130 total plays between the two teams, 69 rushing and 61 passing. Clemson ran just 108 total plays in last year’s Spring Game.

It was the first look for the public at Chad Morris’s Clemson offense. Morris came to Clemson as offensive coordinator from Tulsa, where he led the Hurricanes to over 500 yards and over 40 points per game last year in a 10-3 season. ” “People saw that we will run a fast paced offense this coming season, but we really would like to go faster,” said Swinney. “I was pleased with what I saw in the running game today. All three of our backs ran well. And Tajh Boyd ran well. He made some good decision today and most importantly, he did not have a turnover.” Clemson snapped the ball with 16-20 seconds left on the play clock on most plays.

Boyd threw for one touchdown (to tight end Dwayne Allen) and rushed for one. He was 8-24 for 114 yards passing and had 8-43 rushing. His Orange offense had 255 yards rushing in just 41 attempts, a 6.2 average. DeAndre Hopkins, Clemson’s top receiver last year as a freshman with 52 catches, had four for 54 receiving on Saturday. Allen added 3-43 and a 10-yard score.

There were many outstanding defenders in the game as well. Desmond Brown was the top tackler for the victorious Orange team with seven stops, all first hits. Martin Jenkins added five stops, while Spencer Shuey and Andre Branch each had two sacks. Justin Parker had the only interception of the day.

The White defense was led by Jonathan Meeks with seven tackles and two passes broken up. Garry Peters, a red-shirt freshman, had six stops, a fumble recover and a pass broken up. Quandon Christian had five tackles and a forced fumble. Freshman Corey Crawford, who entered Clemson in January, had two sacks.

The Orange team took a 13-0 lead after one quarter. Boyd took the Orange team on a 29-yard drive for the first score, a 10-yard Boyd run. Later in the quarter the Orange team rove 80 yards in 16 plays and Buice finished off the drive with a 12-yard run. A 25-yard pass from Boyd to Hopkins was the key play of the drive.

The White team got its first score in the second period on a one-yard rush by D.J. Howard, a playing that finished off a 65-yard drive in six plays. Stoudt hit Jones for a 45-yard pass play to highlight the drive.

The Orange made it 15-7 at the half when a bad snap was batted out of the endzone by White team quarterback Tony McNeal.

The two teams played with a running clock in the second half. Spencer Benton made a 50-yard field goal for the Orange team for the only score in the third period.

Mansa Joseph scored on a one-yard run in the fourth period for the White team to pull his team within five points (18-13), but the Orange team came right back on an 80-yard drive that culminated with a 10-yard scoring pass from Boyd to Dwayne Allen. Boyd also completed a 20-yard pass to Hopkins in that drive.

Dawson Zimmerman also had an outstanding day punting with a 52.6 average on six punts.

“Today finished a good spring practice for us,” said Swinney. “It was a physical spring and today was a physical game, but there were no new injuries and that was important. Now we start an important summer workout period before we start back with practice in August.

“I want to compliment the coaches, they have worked hard all spring. We have gotten better and will need to continue to work hard as we go forward.”

Clemson offensive starters Andre Ellington (RB) and Antoine McClain (OG) were held out of the game due to injury.