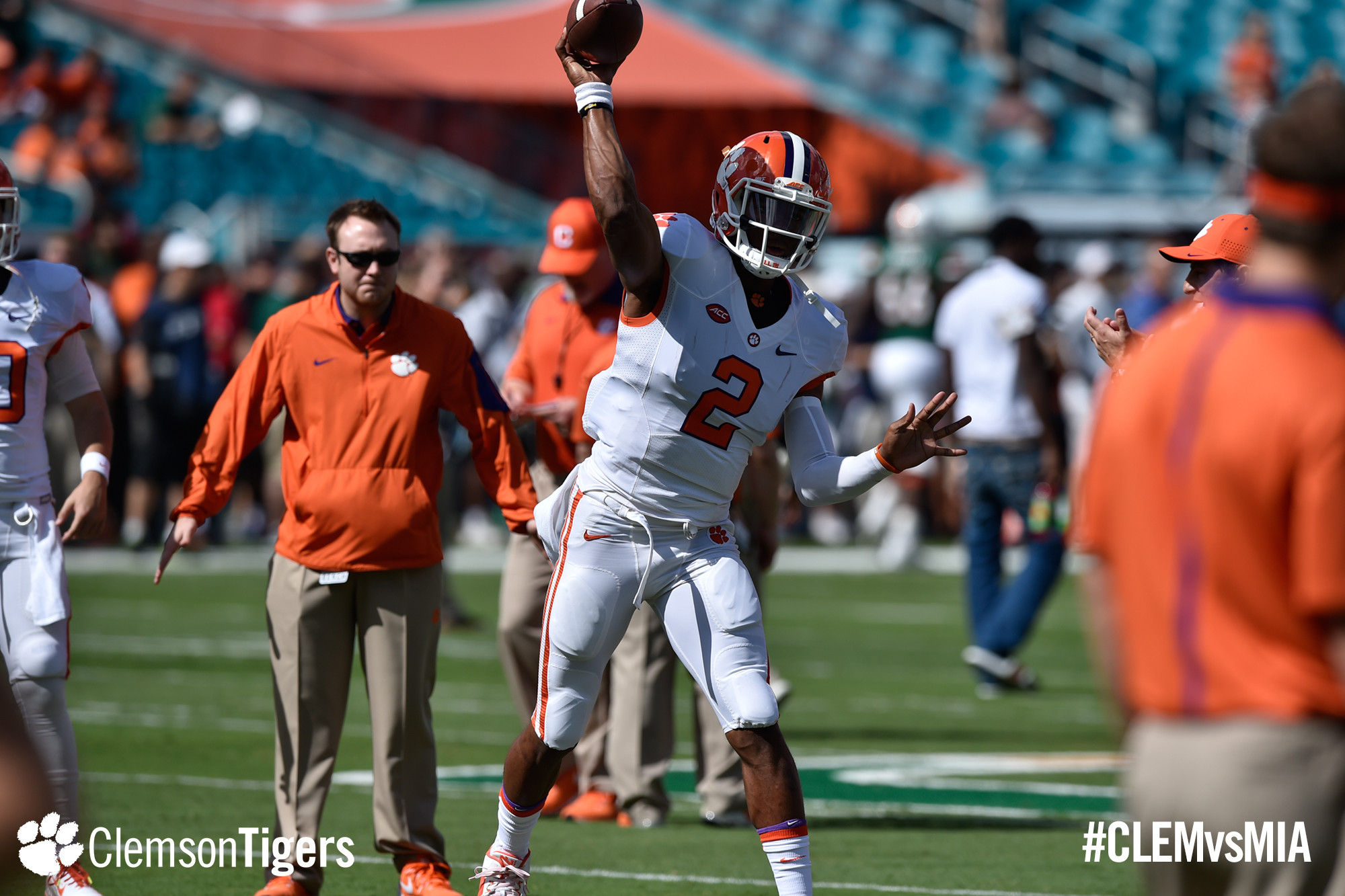 Clemson, S.C.—Kelly Bryant rushed for 66 yards and a touchdown and Tucker Israel completed 13-19 passes and threw for a score to lead the Orange Team to a 19-14 win over the White Team in Clemson’s annual spring football game at Memorial Stadium. A spring game record crowd of over 60,000 Tiger fans watched the game that concluded the spring practice season for Dabo Swinney’s reigning National Champions.

“The first thing I want to do is thank our fans,” said Swinney after the game. “We don’t have exhibition games, so any time we can have a practice that is as close to a game situation as possible it is a big plus.   Our fans were great, we had people in the upper deck.”

Much of the attention on the Clemson team this spring has centered around the quarterback position where Swinney must replace Watson, the two-time Heisman finalist and two-time All-American who graduated in December and quarterbacked Clemson to the National Championship game each of the last two years.

Four quarterbacks worked over the course of the game. Kelly Bryant suffered a tendon injury to the pinky finger on his throwing hand on the first snap, but continued to play. “He wanted to continue to play even though it made it difficult to throw,” said Swinney. “He has shown great leadership all spring and if we had to play a game today, he would be our starter.”

Swinney made the quarterbacks “live”, meaning they were tackled to the ground like a regular game. It was the first time since 1992 that was the case for the Clemson spring game. The team also played all kicking plays live.   “The quarterbacks wanted to do it and it was good for the defense also. There were only two sacks in the game.”

With the injury, Bryant completed just 4-13 passes for 43 yards, but had 12 rushes for 66 yards and a touchdown. “Kelly will have to wear a splint for six weeks, but he will be ready for summer workouts,” said Swinney of his junior quarterback.

Israel completed 13-19 passes for 94 yards and a score, a 14-yard strike over the middle to Trevion Thompson in the third period.

Freshmen Zerrick Cooper and Hunter Johnson split time for the White team. Cooper completed 11-18 passes for 81 yards, while Johnson, a freshman who is the first signee from Indiana to come to Clemson, hit on 5-13 passes for 48 yards. He did complete a 24-yard scoring pass to Cornell Powell. Cooper also picked up 26 yards on five rushes for the White team.

Bryant was the leading rusher in the game. Running back C.J. Fuller had 13 rushes for 51 yards to support Bryant, a big reason the Orange team had 157 yards on 39 rushes.

Adam Choice led the White team with 9-34 rushing and a touchdown. Cooper had 26 yards and Tavien Feaster had 21 on five attempts.   Feaster led everyone in all-purpose running with 142 yards, including 102 on four kickoff returns.

Five players had four receptions apiece in the game that was played with regular time for the first two and a half quarters, then running time for the last 25 minutes.   Hunter Renfrow had four catches for 46 yards for the Orange team, while Ray-Ray McCloud had 4-34 and added 12 rushing yards and 66 kickoff return yards. The White Team was led by Cornell Powell with 4-45 receiving. T.J. Chase had 4-36.   Deon Cain had four catches but for just five yards.

Each team showed a strong defense and that could be a strength of the Clemson team in 2017 as the Tigers return seven starters from a unit that finished in the top 10 in the nation in scoring defense and total defense.

J.D. Davis led the White Team defense with nine tackles, including 1.5 tackles for loss. Van Smith added eight stops, all in the first half. Korrin Wiggins had the only turnover for the White Defense as he had an interception. Trayvon Mullen had six tackles and two passes broken up.

“We have a chance to be really good on defense,” said Swinney.   “We have more depth than we had last year. You are going to see a lot of new young players contribute.”

One of the other highlights of the day was the kicking of Greg Huegel, who had field goals of 40 and 47 yards, and the punting of Will Spiers, who averaged 40 yards a book on nine punts and had a net punting average of 40.0.