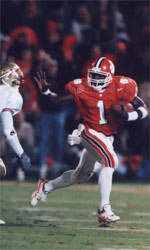 CLEMSON – On Friday, ClemsonTigers.com, the Official Athletic Web Site of the Clemson University Athletic Department, launched a comprehensive website solely dedicated to the accomplishments of one of the most electrifying athletes in school history.

The season is a little more than one month away, but Woodrow Dantzler has been named a first-team preseason All-American by Lindy’s and Football News, the top candidate for the Davey O’Brien Award by Street & Smith, and the #2 Heisman Trophy candidate by CBS Sportstline.com and Lindy’s, just to name a few.

Dantzler’s website is accessible from the home page of ClemsonTigers.com and the football body page. It is the most complete source on the Web for information about Clemson’s Heisman Trophy candidate which includes the biography of Woodrow Dantzler, his career stats, records, photos, quotes, and news from around the Internet about the soon-to-be graduate quarterback. The site will be updated throughout the season to reflect the quarterback’s most current headlines and statistics.

In addition to Dantlzer’s accomplishments and headlines, you will also be able to follow the 2001 season from the Heisman Trophy candidate’s perspective, as he will be providing the fans with a weekly diary beginning the week of August 22.